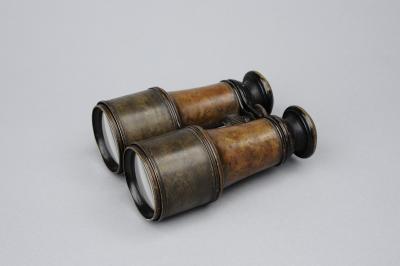 The famous traveller Henry Morton Stanley (1841-1904) brought back important collections of items and specimens to Britain from his journeys in Africa. Many of these, including seeds and rock samples, were collected during his last expedition, the Emin Pasha Relief Expedition (1887-1890), despite canoe wrecks and a lack of porters. Stanley was particularly keen on collecting arms, which he displayed on the walls at his home residence. His publications help classify a number of these items, mostly from the Swahili and Zande areas, though some remain unexplained so far.

Other items include his compass, thermometer, altimeter, sextant and artificial horizon. Initially, as a journalist and self-made man, Stanley had not been welcome in scientific circles. Following his successful expedition in search of Dr. Livingstone (1871-1872), geographers were even doubtful of his achievement. For this reason, he carefully prepared his following expeditions across Africa (1874-1877) and those on behalf of King Leopold II (1879-1884). To be in line with the expectations of the Learned Societies and the general public, he was anxious to carry with him the obligatory attributes and scientific instruments of the modern traveller. His notebooks show that he routinely reported his caravan's position and described and sketched landscapes and plants.

In 1954, the Royal Museum for Central Africa commemorated the 50th anniversary of the death of Henry Morton Stanley. His adopted son, Denzil, availed himself of this opportunity to donate over 300 items of memorabilia then housed in his parents’ estate at Furze Hill, Surrey, UK. This collection consists of records of Stanley’s travels as well as honours and awards presented to him.

The Stanley collection at the Royal Museum for Central Africa is the only consistent remnant of the vast collection that he assembled. In 2002, the Stanley heirs vacated the Furze Hill estate. Archives, photographs and souvenirs still housed there came under the auctioneer’s hammer and the estate was sold.