The photos of Herzekiah-Andrew Shanu 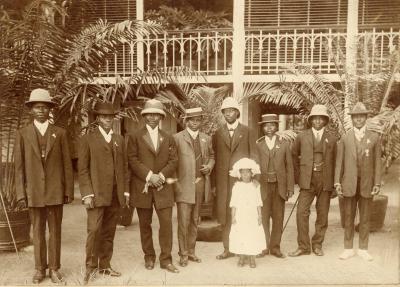 Herzekiah-Andrew Shanu (1858-1905), of Nigerian origin, was trained as a teacher by the Church Missionary Society and taught for several years at the primary school in Lagos. In 1884, he entered into the service of the International Congo Association where he spent nine years working for the administration and ended his career in the service of the Congo Free State as sub-commissioner in the district of Boma. He was a remarkable man in every respect and especially known for his photographs which recount an episode in the history of the Congo Free State.

In 1893, he left the administration to devote himself to his business which quickly prospered thanks to various activities such as the hotel industry, photography, the sale of food products, ready-to-wear clothing and even laundry services. Shanu travelled through Europe and visited Belgium, France, Germany and England, a rare feat for an African at that time. In 1894 he apparently visited the Universal Exhibition in Antwerp. He was invited by the Belgian Association for Colonial Studies and gave several lectures, mainly in Brussels to the Royal African Circle and in Tirlemont.

It was during his stay in Belgium that he made the acquaintance of Lieutenant Charles Lemaire. The two men met up again in Congo. Lemaire's notebooks relate the confidences and impressions of Shanu who, in the eyes of Lemaire, had "an intimate contact with the people of his race".

At the time of the anti-Leopold campaign started by Edmund D. Morel and the Congo Reform Association, Shanu entered into contact with Morel and sent him information, notably on the ongoing trials. Following his involvement in this affair, he was banned from the European society of Boma, which led to the bankruptcy of his commercial activities and probably to his suicide in September 1905.

The RMCA has around sixty photographs, believed to have been taken by Shanu, in the form of glass plates and clichés.