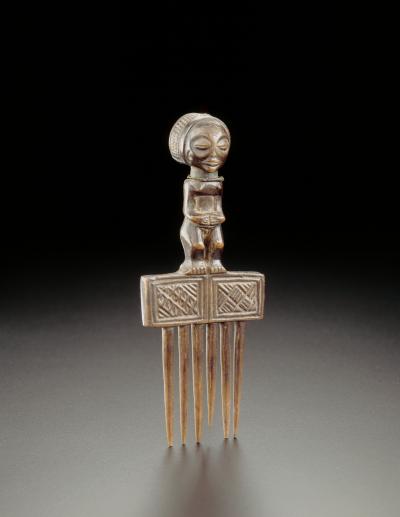 For the Chokwe, combs (cisakulo) have a dual purpose. This utensil, with strong teeth, is used in the first place to untangle the hair of both men and women. However, combs can also be used to style and decorate the hair. It should be noted that, according to Marie-Louise Bastin, only the men use combs to style their headdress.

The Chokwe are a major group of people in the largest part of eastern Angola. Chokwe groups also exist in Zambia and in the DRC. The latter two groups are the result of a wave of immigration from Angola at the end of the 19th and beginning of the 20th centuries.

Chokwe combs can be classified in two major categories. The first concerns sculpted examples in wood. They have figurative or geometric decorations which are sculpted or cut in the wood. The second category includes combs whose wooden teeth are linked by a delicate weaving technique. Despite the popularity of this type of Chokwe comb, it was less often collected than the sculpted examples.

Many Chokwe combs which are in the collection of the RMCA were donated by private collectors and dealers who seem to have been particularly attached to this small-sized objects which are often elegantly sculpted. In the 1980s, Jeanne Walschot, a Belgian collector and dealer, donated to the RMCA a collection of more than 60 Chokwe combs. Other cisakulo registered in the collections were acquired directly in the field by scientists working for the museum. At the beginning of the 1950s, A. Maesen acquired some 20 examples during his ethnographic mission.