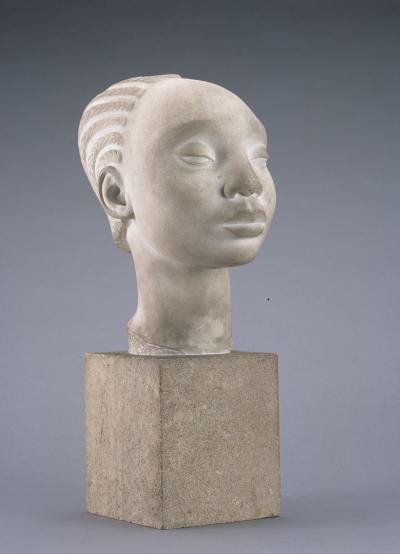 Trained in the Academies of Liège and Brussels, Jane Tercafs was an up and coming sculptor in the political, economic and cultural blossoming of the inter-bellum period. She made three visits to the Belgian Congo between 1935 and 1940. The RMCA has some of her archives and is one of the rare institutions to preserve her work inspired by the Uele region, i.e. some twenty sculptures in hard stone, plaster and bronze, a dozen sketches and five plaster bas-reliefs.

Through women, she easily entered the Yogo and Meje cultures of the Uele region. Her independence with regard to the colonial administration, with whom she had strained relations, facilitated her integration. Ethnographic and linguistic research went hand in hand with her research into the plastic arts and she also had contact with the Commission for the Protection of the Indigenous Arts and Crafts (COPAMI). After uncovering several archaeological remains in the Api region, she attempted to link certain local cultural elements to ancient Egypt.

As was the case with many of her contemporaries, the artist fought against the destructive effects of western assimilation on traditional art while at the same time ignoring the dynamic appropriation that operated at the time. She observed the relationship between the coloniser and the local communities, looking at the recruitment by Catholic missionaries and the impact of their art workshops, as well as at the European practice of collecting material culture.

Beyond the colonial fashion of so-called ethnographic portraits, Jane Tercafs tried to reconcile the portrait of an individual, its idealised representation and the search for formal perfection. When the RMCA acquired the sculpture collection, however, the arguments that justified their purchase merely referred to their 'ethnographic' qualities and the fact that they gave evidence of 'traditional' Africa.