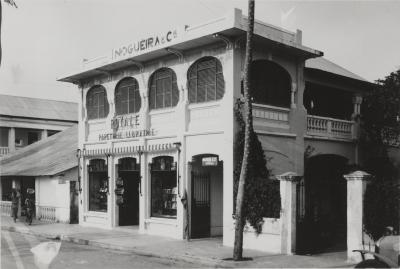 The collections of photographs of the Colonial Office treat a variety of subjects. A limited series of photos is about ethnographic topics, such as villages, markets, so-called ‘indigenous types’, etc. Part of the collection consists of landscape photography with images of mountains, rivers and waterfalls and a remarkable series of ‘cloud formations’. The majority of the collection consists of photos documenting the infrastructure of the colonial project: railways, bridges, warehouses, townscapes and various buildings.

The infrastructure photos are usually arranged in typological series: houses, hospitals, schools, post offices, commercial buildings, work camps, but sometimes also by subject, such as ‘hygiene’, or by author. The collection contains an interesting photo reportage about Katanga in the 1910-1914 period, made by Edmond Leplae, the former director of the agricultural department of the Ministry of Colonies. What is also remarkable is the photographic report of doctor Duren about the medical infrastructure in Astrida, Boende and Bukama. Although the Colonial Office was an official documentation service, the collections also contain numerous images of missionary posts.

The Colonial Office developed into a vehicle of colonial propaganda as of 1933. It also played a major role in the organisation of departments on Belgian Congo at various world fairs. The Colonial Office became part of the Ministry of Colonies after World War II. However, it was shut down and replaced by new structures in 1947.