The archaeological excavations of Sanga 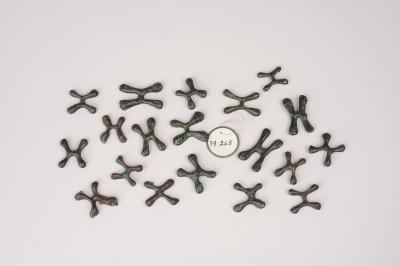 The grave field of Sanga lies in the North of the province of Katanga, where the Congo river crosses the swamps of the Upemba Depression. Archaeological research has indicated that the river’s wealth has been exploited for a long time. It enabled the recovering of more than 1500 years of history. Until now, about fifty archaeological sites in the Depression are known. Only six sites were excavated during campaigns in 1957, 1958, 1974 and 1975. The best studied site is the grave field of Sanga on the banks of Lake Kisale.

The Sanga collection of the RMCA consists mainly of archaeological objects from the 1957 excavations, which were led by Jacques Nenquin. The grave goods of 34 of the 55 graves are kept in the RMCA. The human bone material ended up in the Royal Belgian Institute of Natural Sciences and in the National Museum of Lubumbashi. The RMCA’s collection also includes material gathered in various places in the area, which was donated to the museum in the first half of the 20th century.

Most graves date from the Kisalian period (10th-12th century AD). Ten graves are attributed to more recent periods on the basis of the pottery style. The composition of the grave goods provides insight into the social organisation, politics and economy of these societies that knew a distinct hierarchy and were part of a flourishing trade network. The grave goods consist of numerous pottery vessels and metal ornaments and tools. In some cases ‘croisettes’ were found. These are copper cross-shaped ingots that were used as a means of payment. One grave is notably rich. 29 pots, 47 bracelets, 25 anklets, 33 rings, a necklace and a heavy copper belt with iron spearheads and knives were found here. The presence of rich child graves indicates that social status was hereditary.