Photographs of the expedition of Charles Lemaire (1898-1900) 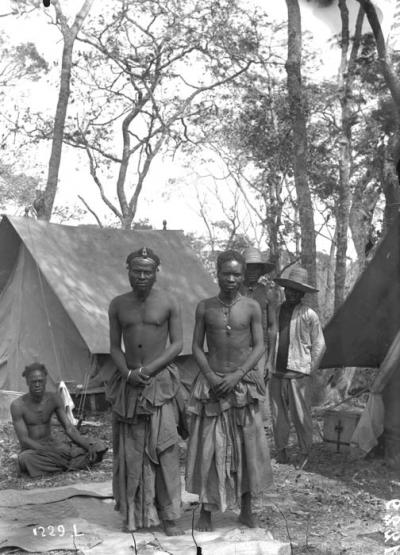 The expedition of Charles Lemaire (1863-1925) was accompanied by photographer and taxidermist François Michel (1855-1932). Between April 1898 and September 1900, Michel travelled from the east coast of Africa across Moliro until Lake Dilolo, together with Lemaire, convoy leader Justin Maffei, artist Léon Dardenne and geologists Jean De Windt and William Caisley. He was responsible for taking photographs of the expedition on its way, and for creating a natural history collection. The return trip via the Congo River ended after 6,600 km on the west coast of Africa. Apart from some Europeans, the expedition consisted of hundreds of Africans who had been recruited as boys, porters, soldiers or washerwomen.

The mission’s European members had to carry out various tasks. The expedition served, among other things, to gather exhibition material for the Congo Museum in Tervuren. This new permanent institution would open its doors on 15 May 1898, following the temporary exhibition that had been part of the Brussels-Tervuren 1897 fair. Typical of the early expeditions in the service of the museum was that a wide range of material was collected: ethnographic objects, prehistoric tools, natural history specimens, geological samples, etc. Due to the lack of education of the expedition’s participants, very little background information about the items was written down.

Apart from scientific objectives, the mission also had clear political goals. Lemaire had to make maps of the region that was on the border between Congo Free State and the British colonial possessions. The expedition also served to suppress by military means a local rebellion, resulting in victims on both sides. Taking part in an expedition was a risky business. Jean De Windt and William Caisley drowned and Maffei got ill and was repatriated. Most victims, however, fell on the side of the porters, where many of them died from exhaustion and deprivation, due to the harsh living conditions in the caravan.