Photographs of the expedition of Armand Hutereau 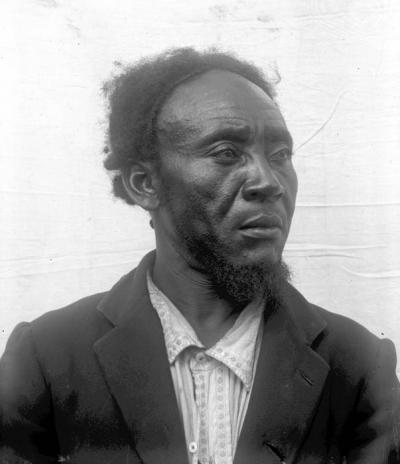 In February 1911, Armand Hutereau (1875-1914) was sent out to the north of Congo for two years to gather material for the ‘Museum of Belgian Congo’. Thanks to this expedition, the division of Ethnography was enriched with a staggering 10,224 objects, including numerous musical instruments. Photographs, films and sound-recordings served to interpret the ethnographic objects and indicated how, for instance, pots were made. The photographs also indicated great interest in the ‘hidden regions of the female body’, and for albinism and illnesses such as syphilis, leprosy and gonorrhoea (a venereal disease caused by bacteria).

Hutereau was accompanied by Van der Gucht, who died during the expedition because of the effects of haematuria (blood in the urine). The other European members of the expedition consisted of taxidermist Ceuterickx, photographers Geno and Facq and Mrs Hutereau. The presence of European women in the colony was highly exceptional in the early 20th century. Mrs Hutereau started an important collection of birds that later turned out to include new species. Hutereau made plaster casts of ‘tattoos’ of 11 Africans and collected five skulls and a ‘pygmy’ skeleton. Unlike Lemaire, Hutereau travelled without a military escort, though he did continue to recruit African porters to carry the expedition’s material and tired Europeans in hammocks.

After his return from Congo and the breakout of World War I, Hutereau was drafted by the Belgian army. He fell in battle on 24 November 1914 near St.-George. Histoire des peuplades de l’Uele et de l’Ubangi (1927), a historical ‘introduction’ of over 300 pages to a more elaborate study of the north of Congo was published posthumously, but the study itself was never accomplished.