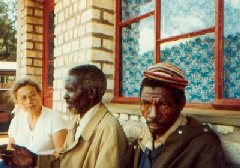 During five years we went along with a hundreds of healers from Burundi. These men accepted to give us some information. It's an illusion for a European who knows neither their language nor their customs to think he will meet a healer who will tell him about his practice. If he tries to establish such a contact he will receive smiles, evasive answers or the common " I don't know".

In fact disturbs and his perseverance raises lots of questions: 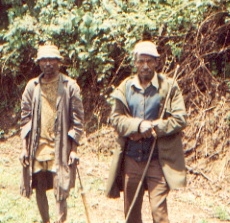 Even if these questions receive a satisfactory and reassuring answer, many healers think that the essence of the healing power is a mystery and that it's difficult to speak about the incommunicable. Furthermore, isn't making the ancestor 's secrets public of great danger? Speaking to this alien may disturb the community and the sick persons. To let him in the village it is taking the chance that he will catch sight of some important men. This is very annoying! These gathered indecisions constitute an almost insurmountable wall, which can only be crossed by someone who lived a long time with these populations and has their trust.

Some people have such consideration: missionaries, native religious congregation members, and some representatives of the local party or administration. We needed to get in touch with them and convince them to help us. 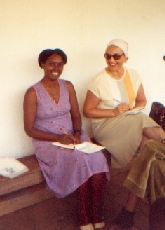 As time went by, it became possible to distinguish some healthy practices. At this time is the function of apothecary promoted and some remedies are being used in some missions' advice centers. In the last ones we did look for our local populations' ambassadors. We began by explaining our goals and our methods to these missionaries, these African religious figures. Some of them did accept to help us.

As far as the local civil and political authorities are concerned, we had to obtain their friendly neutrality and sometimes a word of introduction. European people living in the hills and working on something else than technical tasks are scarce. Anyone who tries to gain access to the ordinary circles may be suspected of having political intentions, of philosophical proselytism; he will be observed and his interlocutors questioned. More than one has been asked to leave the country.

Teaching at the official university of Burundi, we received introductions letters from the academic authorities. Thanks to these we were able to go around freely and to get in touch with those who agreed in meeting us. 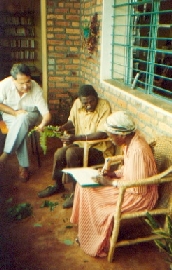 A hundred of healers agreed to these conditions of collaboration to our research. Generally we met them in a isolated spot, a mission, an small administration office, a glade, rarely at home. The meeting was planned long before to let the healer the possibility to collect or to let his usual suppliers collect the plants he wanted to sell us. Some other times he was attracted by being ride far from his home which allowed him to collect plants which he could not find in his region en this in high quantity and for his own needs. These approach techniques gave good results and needed time and patience.

In totality, between 1980 and 1984, we collected +/- 6000 plants, each healers being approached minimal five times. As we learned, it became clear that some of them had a better knowledge of the botanical world and of the traditional medicine. We met these ones very often.

In some regions, our frequent crossing did not bring any curiosity any more. We were part of the social environment. Our relations with some of the healers became so friendly that they made us meet some of their colleagues. In exchange, we helped them getting in touch with healers from other regions. 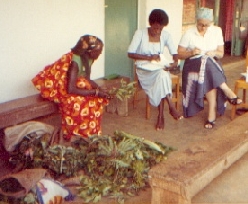 We were working in the framework of the researches of the Botany Department at the University of Burundi. Students were of courses associated to our researches. They came with us during our excursions and functioned, among other things, as translators. Each one of them always worked with the same healers. In this way small groups were formed. These were constituted of healers; researchers and students who learned to know each other. Friendships were established and harmony became better as the meetings went by. Working this way, we always got a very good collaboration from everyone.

Read also : The healer against the illness of the body and the mind: in the past and nowadays