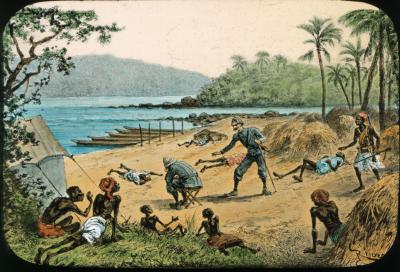 Using “magic” lantern slides to show images is quite old. In the 19th century, this use shifted from recreation to education. A lantern slide is composed of two thin glass-layers sandwiching an illustration. First, very thin coats of colours were hand-painted on glass-plates. Then, the development of the dry-plate process and more powerful light allowed photographs to be projected too, and in Stanley’s specific case, a photographic or engraved reproduction as well. It was inserted in a lantern emitting gaslight through it, to project the image to a public.

Stanley used his lantern slides during his conferences, much like our present-day slide or “PowerPoint” presentations. To sustain the sale of his publications, he systematically delivered lectures both to Learned Societies and during professionally organized tours which were very successful. These drew him from Great Britain to Australia & New-Zealand, and included a USA coast-to-coast trip in the 1890’s. Stanley was particularly skilful in handling the medium. The projected illustrations helped not only in drawing the audience’s attention and stressing the traveller’s speech, but also in satisfying the public crave for palpable exoticism. All of Stanley’s journeys may be found there, from the search for Livingstone in 1871-72 to the rescue of Emin Pasha in 1887-90. Aiming at armchair tourists, the various iconographic schemes thus illustrated mostly convey the usual stereotypes and propaganda then current in the various colonial metropolis and their audiences.

Because of their fragility and design, sets of lantern slides seldom reached our present time. They are now considered extremely valuable evidence of the 19th century mass approach to the travel and/or visual industry, significantly featuring pre-cinematographic works and era.