Mission of the RMCA

The Royal Museum for Central Africa must aspire to be a world centre of research and knowledge dissemination on past and present societies and natural environments of Africa, and in particular Central Africa, to foster – among the public at large and the scientific community – understanding of and interest in this area and, through partnerships, to contribute substantially to its sustainable development. Thus the core endeavours of this Africa-oriented institution consist of acquiring and managing collections, conducting scientific research, implementing the results of this research, disseminating knowledge, and mounting selected exhibitions of its collections.

Mission of the museum

The AfricaMuseum is a centre for knowledge and resources on Africa, in particular Central Africa, in an historical, contemporary, and global context. The museum exhibits unique collections. It is a place of memory on the colonial past and strives to be a dynamic platform for exchanges and dialogues between cultures and generations.

The AfricaMuseum  has a code of ethics to which all partners wishing to organize an event in or around the museum must adhere.

The Royal Museum for Central Africa (RMCA) is one of Belgium's ten federal scientific institutes (FSI), under the authority of the Secretary of State for Federal Science Policy.

The museum has some 250 employees, including 80 scientists.

The scientific institute is divided into three departments: 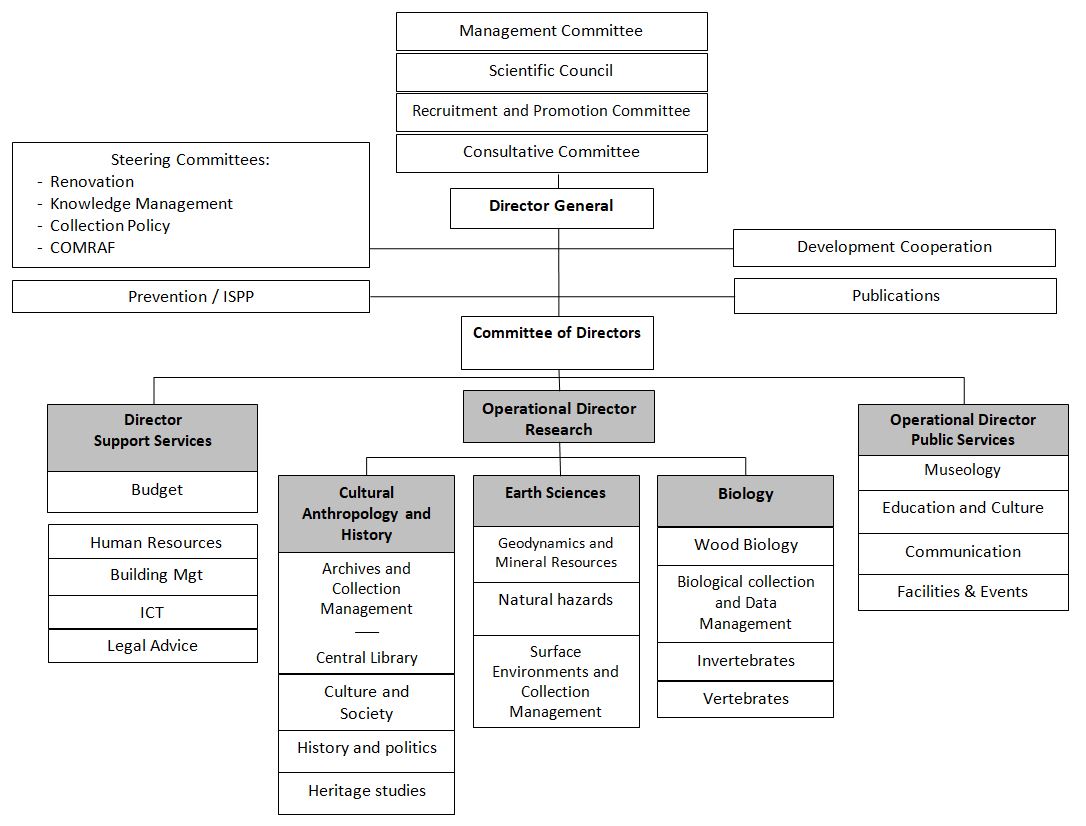 Read the text version of the Organisation chart

It is responsible for the financial, material and administrative management of the institution, and serves the same function for the Royal Belgian Institute of Natural Sciences.

The committee provides opinions on the quality and relevance of the institution's scientific activities.

Half of its members are external experts from Belgian universities and the other half are from the museum's executive scientific staff. The members of the Scientific Council are appointed for a four-year term by the Secretary of State of Belgian Federal Science Policy.

The committee is responsible for the selection and promotion of statutory scientific staff.

It is chaired by a Federal Science Policy representative and is made up of two external experts from universities and the RMCA's Director-General.

This committee is an advisory body focusing on well-being at work and working conditions. It is made up of museum staff and workers’ organisations (unions).

This report presents the results of the assessment of the research activities of the Royal Museum for Central Africa.

This assessment was conducted by Technopolis Group in the period April 2014 - March 2015. The report was commissioned by the Belgian Federal Scientific Policy Office (BELSPO).

This report presents the results of the assessment of the AfricaMuseum’s public-oriented services.

This assessment was carried out by the Technopolis Group in 2017. The report was commissioned by the Belgian Federal Scientific Policy Office (BELSPO).