The objects of the mukanda initiation 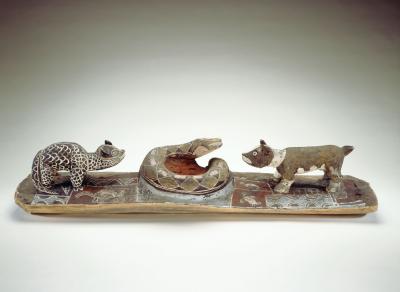 The mukanda is an ancient male initiation rite which is practised throughout a large geographical area. Initially, this custom mainly concerned children or young adolescents between the ages of 9 to 15. Many objects were made to be used during the mukanda, sometimes by those who had been circumcised themselves. Several objects displayed here allow us to view just some of the rich ethnographic collection that the RMCA possesses with regard to this fascinating subject.

Taken far away from their parents, the adolescents were circumcised by a man who was experienced in carrying out the operation. They stayed several months, even several years, in an encampment in the bush. During this harsh period of confinement, they learnt to be hardy and to respect the rules governing the village community. They learnt about myths, carried out various manual tasks, hunted and were taught how to behave properly towards women. When they finally left the mukanda, the circumcised males were no longer children but men who were ready to take an active part in community life.

Among the mukanda ritual objects are masks which could, depending on the models and cultures, be worn by the young males themselves, or else by certain dignitaries in charge of the camp and the young men. Statuettes could be used to magically protect the boys while others, due to their symbolism, were used for teaching purposes.

The mukanda was a widespread phenomenon. It exists or existed throughout the southern part of the DRC (the provinces of Katanga, Western Kasai and Bandundu), in the north-eastern part of Angola (notably the provinces of North and South Luanda, Malanje and Uige) and in North Zambia (for example, the north-western province). The Lunda and Chokwe population groups were mainly responsible for its dispersion.