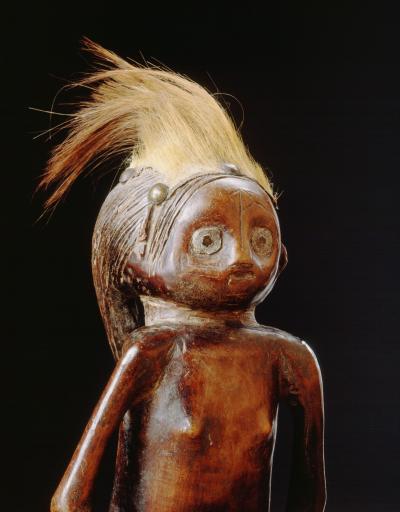 Ovimbundu statue with crown made of antelope hair, which could refer to hunters
See a selection here

The Ovimbundu are a major Angolan population group living in the actual province of Benguela. The art of this culture is not well known by the general public and the number of Ovimbundu objects is relatively small. The Royal Museum for Central Africa (RMCA) has one of the most beautiful collections of Ovimbundu objects. The presence of an Ovimbundu collection in a museum which was initially devoted to what is now the DRC is mainly due to the work of one man, Robert Verly.

Robert Verly (1901-1963) was a painter who initially sat on the Commission for the Protection of the Indigenous Arts and Crafts (COPAMI). In the 1940s, he was asked by the Royal Brussels Museums of Art and History (MRAH) to go on an ethnographic mission to Angola. It was during this mission that he collected Ovimbundu statuettes, some of which are displayed here. The objects were first registered by the MRAH before being transferred to the RMCA between 1967 and 1979. Robert Verly collected information about the intellectual and material life of the Ovimbundu and the Kimbundu. The early death of the researcher meant that most of his work and research could not be published.

Certain aspects of the religious, social and political life of the Ovimbundu can be examined through the objects collected by Robert Verly and other researchers. This is especially true for male or female statuettes with great sculptural sophistication which are displayed alongside several cephalomorphic clubs and other objects such as pipes. Generally speaking, the function of these objects can be divided into four main categories. Some are linked to the soma (the chief or king), while others are associated with the activities of the ocimbanda (the diviner). Others, with a somewhat time-worn plastic character, are connected to the rites of hunting. Finally, there is a whole range of sculptures which were only made to be sold to Europeans, such as Robert Verly.

Tucker, L.S. 1940. ‘The Divining Basket of the Ovimbundu’, Journal of the Royal Anthropological Institute of Great Britain and Ireland LXX part II : 171-203.