The urban photography of Joseph Makula 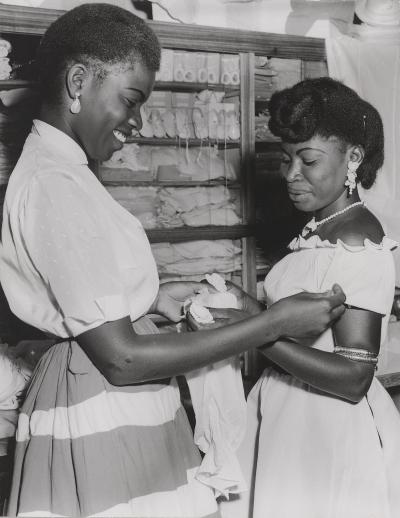 A Congolese saleswoman and customer in a shop in Kinshasa (ca. 1957)
See a selection here

Joseph Makula started to work in 1956 as the only Congolese photographer at Congopresse, the official agency of Belgian Congo. He had learned the trade in the army and had gained some experience while working for a newspaper. Makula mainly photographed the everyday life of the urban Congolese middle class to which he belonged and with which he clearly identified.

One of his subjects was the higher technical education that was developed for boys and girls in the 1950s. He photographed many so-called ‘évolués’, who formed a new Congolese elite. Because of a lack of initiative on the part of the colonial government, they organised themselves education for women, who mostly ended up on the labour market without any formal education or else with very limited skills. The rather intimate photographs Makula took of the interiors of ‘évolués’ clearly reflect the kinship between the photographer and the people being photographed.

Compared to his European colleagues, Makula took considerably less photographs of official events and of foreign visitors of high rank. He also travelled less often. Although we do find some photographs of faraway provincial places, it is clear that he mainly worked in or near the capital Leopoldville (Kinshasa). Photographs of Congolese village life are totally absent in his work. It is unclear whether the striking contrasts between the photos of Makula and those of his European colleagues are a matter of personal preference or rather the result of decisions taken by his superiors.

After independence, Makula trained an entire generation of photographers for Congopresse, including the first and only woman, Mpate Sulia. Mobutu entrusted him with a number of important missions. Between 1981 and 1991, he had his own studio, Photo Mak, in Lemba (Kinshasa). One of his daughters is also a photographer.

With thanks to Rodolphe Mukwema