The collection of ancient maps 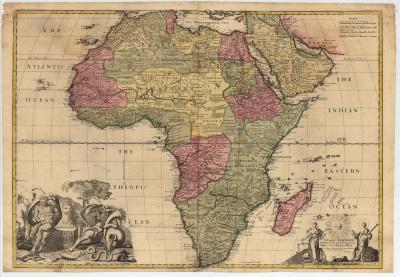 Africa corrected from the Observations of the Royal Society of London and Paris. By John Senex, London, 1711
See a selection here

The collection of ancient maps of the RMCA includes around 3,500 printed maps. Although the majority represent Central Africa, and in particular the territory of the DRC, the lion's share of these maps covers the whole of Africa and other regions of the continent dating from 1500 to 1885. The development of the representation of Africa can thus be followed, from the first maps (Ptolemaic) from the beginning of the 16th century, across the 17th and 18th centuries, up to the second half of the 19th century. From this time, the systematic exploration of the African interior inspired an intense production of maps for the benefit of future colonisers.

A Ptolemaic map of Bernard Sylvanus (Venice, 1511) is the oldest in the collection. Some maps resulting from the work of Waldseemüller preceded the great classical maps of Ortelius, Thevet and Mercator. There are remarkable examples of Dutch, French and English maps of the 17th century produced by famous cartographers such as Hondius, Janssonius, Guillaume and Joan Blaeu, Visscher, de Wit, Sanson, Duval, Jaillot and Speed. A wall map of Africa, published by Pieter Verbist in Antwerp in 1644, a unique item, is the crown of the collection.

At the beginning of the 18th century, the traditional rendering of the continent and its regions was questioned which clearly appears on the maps of Delisle, D’Anville and other German and Dutch examples. Some wall maps from this period bear witness to the transition to a new concept. After the Brussels conference of 1876, cartography of Central Africa took on a political character and particularly the Berlin conference of 1884-85 speeded up this development. The collection includes a representative sample of maps published at this time in Belgium, England, France, Germany and Portugal. Most of these modern maps, topographic, administrative or thematic, particularly concern the former Belgian Congo up to independence in 1960.