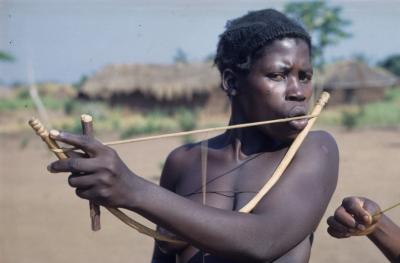 The science of ethnomusicology was given a fixed place in the museum in 1966. The divisions’ task was to register, describe and analyse traditional music and the accompanying musical instruments and dances, and to introduce this to a broad public in the form of several publications. The division’s photographic archive indicates how this aim was aspired to during various scientific missions.

Thanks to the institutional cooperation with the National Institute for Scientific Research (INRS) of Butare, research was carried out from 1973 to 1985 on Rwandan music and dance culture, resulting in an important collection of sound and image recordings that give an overview of the entire range of musical expression in Rwanda during this period.

In the 1970s, a cooperation agreement with what was then Zaire led to the establishment of the National Museums Institute of Zaïre (IMNZ). This made it possible to start musicological research in the provinces of Shaba (Katanga) and Kasai. The first music studied was that of the Luba, whereby the main focus was on the musical instruments and songs that characterised social and religious life. With the help of the Lunda Emperor, the Mwaant Yaav, similar research was carried out with the Lunda, where the music of various rituals and customs was recorded. Finally, the dances and music ensembles of the Salampasu, of which the existence had been unknown until then, were registered. Musicians and dancers were generally glad to cooperate and often excited about the interest in their music.

The sound recordings and accompanying photos and archives form an invaluable source of information about the traditional music in Central Africa. The collection of audio recordings has now been fully digitalised.