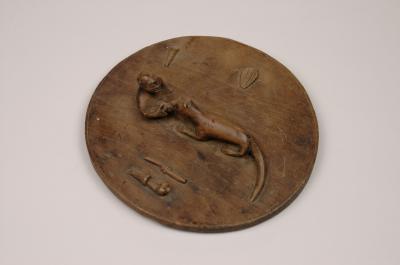 The pot lids carved with proverbs existed in the past in the Lower Congo region and in the Cabinda enclave. They were decorated with various sculptured images illustrating the various sayings known in this region. It were mainly the Woyo that used and produced these utensils which were also known by neighbouring groups.

The pot lids could be used by both men and women. However, it was the men who sculptured them in various species of wood. Some of these sculptors were particularly famous. People often came from far and paid a good price to obtain a pot lid made by a talented artist.

The lids had several uses but the main one was to express a thought, a reproach or an advice. The lid was placed on a food container. It should be noted that these lids were mainly used to settle disputes, more or less serious, within a household.

The use of these utensils had already disappeared in the 1950s. Some collectors obtained large series of them taking care to reveal the significance of their sculptured patterns, the name of the sculptor or the wood species having been used. Despite knowledge of some iconographic keys, reading these pot lids is not easy. The interpretation of a proverb lid may vary depending on its context. There may well be several proverbs relating to one particular symbol.