Henry Rosy and the initiation of gaza wuli 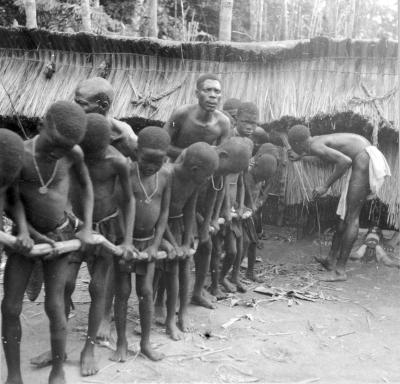 From 1933 to 1939, Henry Rosy worked as a state agronomist in the region of Ubangi in Congo. He collected nearly 400 objects for the museum with accompanying ethnographic notes and hundreds of photographs which enabled the museum to view this collection in its context.

Henry Rosy stayed for two years among the Ngbaka in the region of Gemena from where he took a range of objects and photographs which accurately document the gaza wuli, a male initiation rite, and the gaza wuko, a rite of passage for women. In 1936, Henry Rosy had the opportunity to attend these two important ceremonies in the villages of Lengbwelle and Bombakabo, situated to the west of Gemena. He obtained photographic testimonials which have become an important source for the cultural history of the region. The selection of photos displayed here recounts the circumcision rite of the men of Bombakabo. Henry Rosy, who was allowed to go to the very core of the initiation rite, was a privileged witness to the ceremony.

An agronomist by profession, Henry Rosy was in constant communication with Jozef Maes and Olga Boone who worked for the Division of Ethnography. The quality and relevance of his observations can be considered as genuine on-site ethnography. His correspondence shows that he had great respect for the culture of the communities that he observed, a relatively rare state of mind in the colonial context of the 1930s. Relations of mutual trust that he managed to establish with his Congolese contacts, plus his obvious talent for observation, enabled him to have access to testimonials and information which have significantly contributed to the expansion of knowledge of this cultural area of the north-western part of the DRC.