Reality and fiction in ethnographic photography of the 1950s 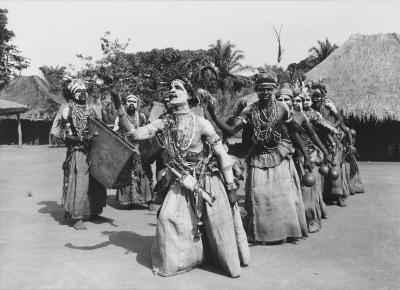 Traditional dance of the 'Bambuli' association (1956)
See a selection here

The Royal Museum for Central Africa has an almost complete series of the photographs of the Information and Documentation Centre for Belgian Congo and Ruanda-Urundi, better known under the name of Inforcongo. This service was founded in the early 1950s by the Ministry of Colonies to provide a positive image of colonial undertakings. Many photos depict the material accomplishments of the colonizer, while others represent the radical economic and social transformations of Congolese society. The collection also includes a remarkable series of images of traditional dances. What is typical of these photographs is the tension between reality and fiction and their ambiguous claim to ‘authenticity’.

Two exceptionally productive and well-known photographers of Inforcongo were Carlo Lamote and Henri Goldstein, who applied themselves diligently to ethnographic photography. Inspired by the ideal of the ‘explorer’, they were constantly on the lookout for interesting ethnographic subjects. They were convinced of the fact that local traditions would be disappearing shortly, which is why they needed to be captured on the photographic plate as soon as possible.

However, they themselves often organised the traditional dances and rituals they wanted to ‘discover’ and document. In doing this they were helped by territorial agents or missionaries and they had a special budget for sponsoring the preparations and on the spot performances. All elements that were the result of European import or influence were removed in view of an ‘objective’ registration. This was deemed necessary so the images would seem authentic. Because of this, many traditional dances were not ‘discovered’ but rather ‘(re)invented’. Nonetheless, the photos were catalogued as scientific documentation and nowadays they are still frequently used as objective historical documents, without due criticism.