The sketchbooks of the explorers 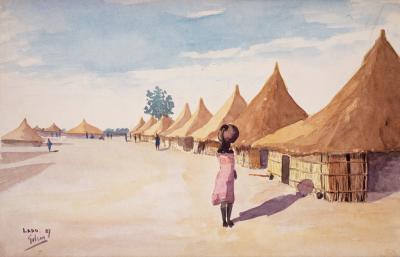 Georges Gilson: "A village in the enclave of Lado"
See a selection here

In 1899 the periodical Le Petit bleu used for the first time the expression ‘explorateurs croquistes’ (explorers-sketch makers) to designate certain works of art. The expression can be used to characterize a whole corpus of graphic work realized during three important enterprises of king Leopold II: the Comité d'Études du Haut-Congo, the Association Internationale du Congo and the Congo Free State. Among the authors of the sketches, drawings, water colours and paintings were collaborators of Henry Morton Stanley, servicemen of the Congo Free State expeditions, and also a few administrators.

The works of these amateur artists constitute a sort of visual encyclopaedia reflecting their knowledge about unfamiliar environments, which they tried to appropriate and share among themselves and with their families. The corpus contains portraits, images of bodies and body art, of European stations and villages in the Equator province, of the Uele and the Nile (in the Lado enclave), of Katanga and Lower Congo. There are representations of the material culture of these regions, as well as drawings of insects, of fauna and flora. Certain images would have a long life as they were particularly appreciated by the professional makers of colonial art: the river, canoes, sunsets, dances. This graphic production complements photography, by adding colour or by representing scenes which were difficult to photograph because of the technical limitations at that time.

The explorers’ writings help us to understand their images within a specific context. Images and writings reflect the historical setting, the divergent cultural backgrounds and also the brutality of the time. They also enlighten us about the difficulty that western artists felt as they tried to represent the landscape, and in particular the light, in regions that did not have the same characteristics of the North.

The exhibition of paintings by Edouard Manduau in Belgium received comments by art critics. The Belgian public was surprised by the palette and tonality of the equatorial rain forest. The relationship between the images produced in the field, the illustrations of travel reports and photography has not yet been sufficiently studied. These exceptional sources deserve to be the object of new interdisciplinary research.