Urbanization in the tropics can accelerate the movement of large landslides

Does the movement of a landslide change when a city is built on it? New research published in Nature Geoscience shows how more than 70 years of urban growth have disturbed the displacements of a large and now densely-inhabited landslide in the city of Bukavu, in eastern DR Congo. This is what researchers from the Royal Museum for Central Africa, in collaboration with partners from Africa, North America and Europe established from an analysis of hundreds of satellite images combined with historical photographs  dating back to 1940’s.

Human activities are transforming landscapes at rates and scales unprecedented in history. These changes are particularly drastic in economically developing countries of the tropics, where major demographic and economic shifts are driving unparalleled rates of urbanisation. In many regions of Africa and Asia for instance, young urban centres are expanding in a rather informal way, often overlooking natural constraints from the environment, and ultimately drastically increasing the population exposed to natural hazards.

On urbanized hillslopes, dozens of lives are claimed annually by small but high-velocity landslides that may wipe out houses in seconds. But slower and larger – sometimes km² in extent – landslides can also be present, here acting as a more pervasive hazard by causing progressive destructions of houses and infrastructure on entire neighbours over decadal timescales. These slow-moving landslides typically show long-term motion characterised by the succession of periods of relative dormancy and acceleration in response to natural stress perturbations (for example, seasonal precipitation, droughts or earthquakes).

For instance, we often observe higher landslide velocities (e.g., from a few centimetre to a few dozen of centimetre per year) during wet seasons and complete or partial stop during dryer months. Yet, these insights on slow-moving landslide behaviour are primarily based on study of landslides in natural environments – typically sited in high-income/high-latitude countries (e.g., the Alps). As a result, our overall understanding of how constraints on the landscapes typical for the tropics such as informal urbanisation affect landslide processes remains very limited. 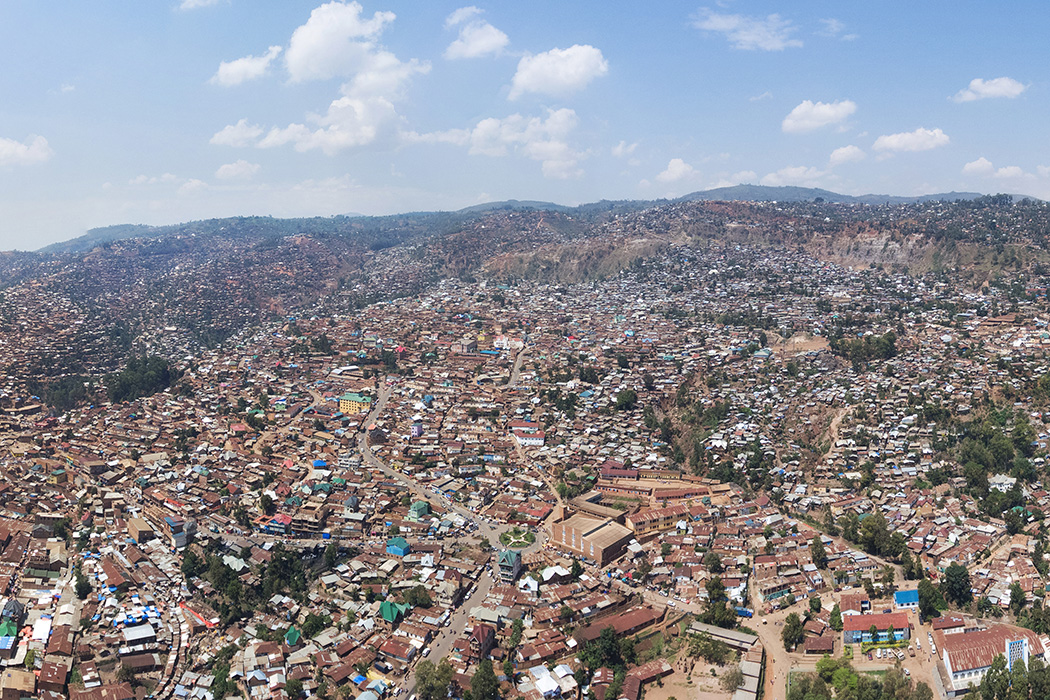 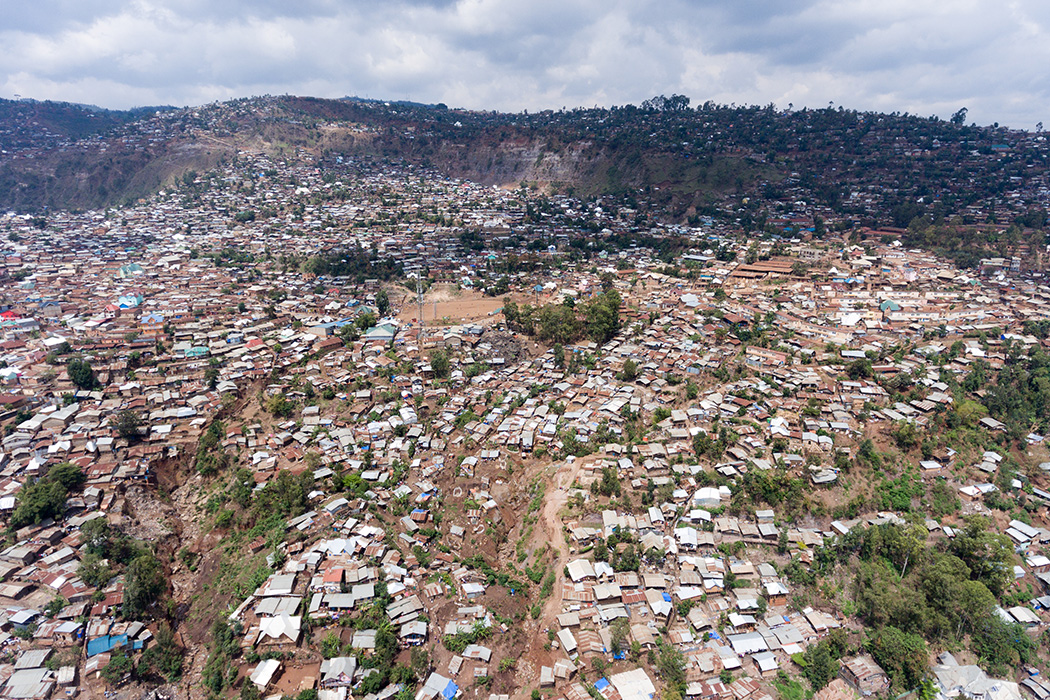 Large slow-moving landslides, natural processes that are sensitive to urbanization

In a new study, researchers from the Royal Museum for Central Africa (RMCA) quantify for the first time how progressive hillslope urbanization changes the dynamics of slow-moving landslides. To this end, they study the seasonal, annual and multi-decadal motion of a large slow-moving landslide located in the rapidly expanding city of Bukavu in eastern Democratic Republic of the Congo (DR Congo). Seen as a safe haven in a region where violent conflicts have forced thousands to move over the past decades, the city of Bukavu is exemplative of the many cities in the tropics facing rapid and informal growth. Here originally established along the flat shoreline of the southern tip of Lake Kivu, the city progressively expanded on the steep – and landslide-prone – slopes of the Kivu Rift. Today, about one-third of the city is built on large deep-seated landslides.

70 years of hillslope urbanization changed the dynamics of a landslide that now hosts over 80,000 inhabitants.

"We explore the link between landslide displacements, climate, seismic disturbance and drastic changes in surface and subsurface hydrology: we evaluate these interactions and feedbacks during no less than seven decades," explains Antoine Dille (RMCA) who led the study in the framework of his PhD research.

Alongside solid field investigations, the researchers relied on more than 500 images from different satellites, combined with historical aerial photographs conserved at the RMCA. This allowed them to quantify how 70 years of hillslope urbanization changed the dynamics of a landslide that now hosts over 80,000 inhabitants.

The interaction between urbanization and the landslide

"With our reconstructions from satellite images, we are able to analyse the week-to-week landslide motion over the past 4.5 years. We show that the current dynamics of the landslide is closely tied to interacting inﬂuences from climate, rock weathering, tectonics and urban development. Such a detailed analysis of a slow-moving landslide embedded in a dense urban environment is unprecedented, especially for the tropics”, Antoine Dille says.

Understanding the current behaviour of a landslide is not enough when we are in an context where the environment has changed dramatically over the past decades. Antoine Dille: “Thanks to the historical records provided by aerial photographs, we find that the sprawl of urbanized areas led to the acceleration of a large section of the landslide, which was driven by changes to the slope hydrology associated with urbanisation such as rerouting of surface water flows — associated with roads, housings or storm drainage — and leaky underground infrastructure”.

"Our findings show that urbanization can interfere with the natural behaviour of long-lived and large landslides. As hillslopes of the world’s cities are being urbanized at accelerating paces, we believe that more studies are needed to improve our understanding of how anthropogenic activity influences surface processes and landscape evolution. This would ensure the valid evaluation of landslide hazard and optimization of mitigation strategies," explains Olivier Dewitte, researcher from the RMCA and landslide specialist who coordinated the study.

The large landslide in Bukavu in 1959 (left) and 2018 (right). The yellow dotted line delineates landslide. The very steep scarp that delimits the upper part of the landside is 100 meter high. Left photo: © RMCA; right photo: © A. Dille RMCA. 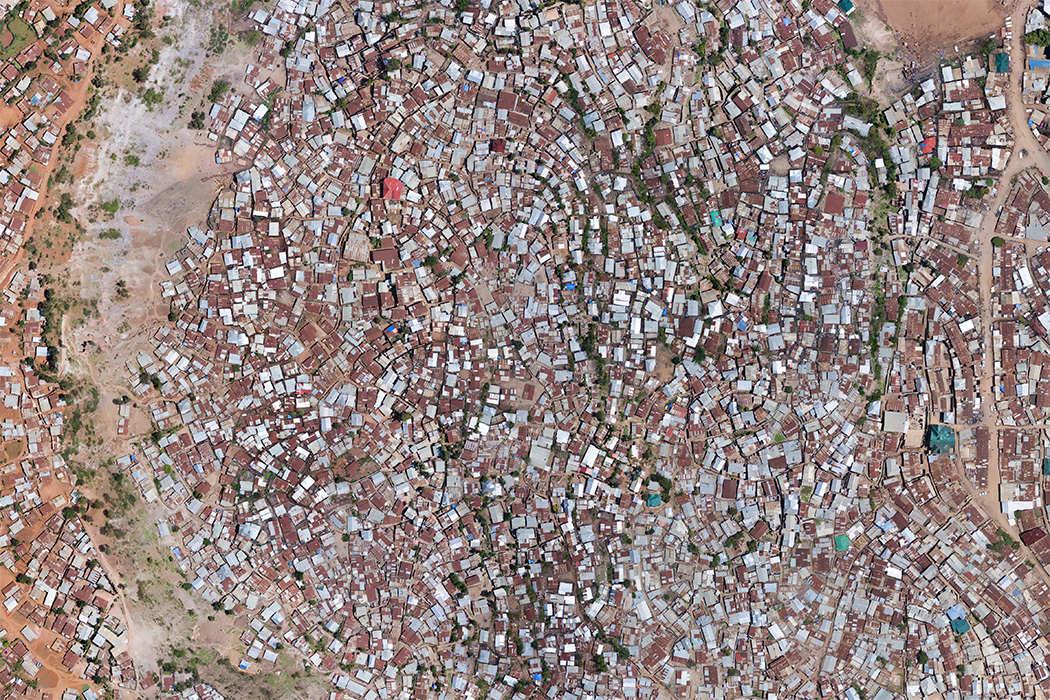 Zoom on the upper part of the landslide in 2018. The image was acquired by drone at a resolution of 15 cm. Every small unit represents a house. The large grey stipe without house represents the main scarp of the landslide. Houses that are located to the right of the stripe are downslope and located within the landslide. A. Dille © RMCA

This research was conducted in the framework of the MODUS project, a STEREO-III project funded by the Belgian Federal Science Policy Office (BELSPO), and coordinated by the Royal Museum for Central Africa.