The intertwined history of Kinshasa and Tervuren

‘This book is a must read for anyone interested in Congolese cultural heritage and cultural identity, museum collections and the current discussion on restitution', says Guido Gryseels (General Director of the Royal Museum for Central Africa).

In Congo en vitrine Sarah Van Beurden traces the relationship  between  the possession, definition and display of art and the construction of cultural authenticity and political legitimacy in the late colonial and postcolonial era.

Drawing on original sources and testimonials, the author illuminates the politics of museum collections. She shows, among other things, how the Institut des Musées nationaux du Zaïre became a showpiece of Mobutu Sese Seko's effort to revive 'authentic' African culture. The book reconstructs the debates between Belgian and Congolese museum professionals, revealing how the dynamics of decolonization played out in the museum world and in the field of heritage conservation. Finally, Van Beurden also casts light on the role of travelling exhibitions in generating a thriving international market for Congolese art.

A new history of the decolonization of Congo

By analysing the interplay between politics, culture and museology, Congo en vitrine offers a new perspective on the decolonization of Congo. Van Beurden tells a new history of decolonization, as a struggle over cultural categories, the possession of cultural heritage and the right to define and represent cultural identities.

This book, previously published in English (Authentically African. Arts and the Transnational Politics of Congolese Culture, 2015), has been appreciated by peers as a noteworthy contribution to the current debate around the decolonization of museums, restitution and cultural policies before and after the independence of the Democratic Republic of Congo.

The book is translated into French and published by the Royal Museum of Central Africa.

Sarah Van Beurden is Belgian and earned her bachelor’s degree in history from KU Leuven and her Ph.D in history from the University of Pennsylvania. She is now associate professor of History and African Studies at the Ohio State University. 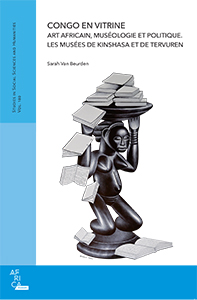 Available in the AfricaShop and in book shops (distribution via Exhibitions International, Leuven), or order here.