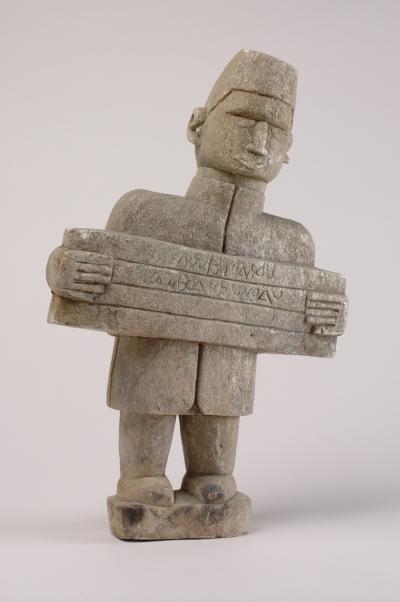 The RMCA’s ethnographic collection contains 120 statues that were placed on the graves of the important deceased in the region of the lower reaches of the Congo river. They are called ntadi, a term referring to the soft stone they are made of. Most of them meet a limited number of types that are symbolic representations of the characteristics with which chiefs, dignitaries and traders liked to be associated. They are therefore not true-to-life portraits, but reflections of how their clients wanted to live on in memory.

A remarkable amount was collected in the 1950s by amateur ethnologist Robert Verly, who assumed they were part of a century old tradition. However, further investigation indicated that their production can roughly be dated between 1850 and 1930. This period coincides with the development of a flourishing trade in the Congo estuary. Chiefs and traders enjoyed great esteem thanks to the various European products they acquired in exchange for palm nuts and ivory. They liked to pose as authoritarian slave owners, but also as ‘men of their time’ who had learned new skills, such as reading.

The raw material of these grave statues came from two stone quarries. A rough figure was hacked from the soft stone on the spot, in order to ease transport to the workshop. On the basis of style analysis, it is presumed that around twenty workshops were once active. The stone was tooled with an adze and a knife, just like in wood sculpture.

The competition between workshops has led to a wealth of themes. Certain themes are abundant, indicating that sculptors also adapted to the wishes of their potential customers. The ‘best sellers’ included depictions of the ‘thinker’, of mother and child and of a figure holding his hands open in front of him. The latter is presumably a representation of someone who is capable of reading documents, a new skill that commanded great respect.