The actors of Congolese independence 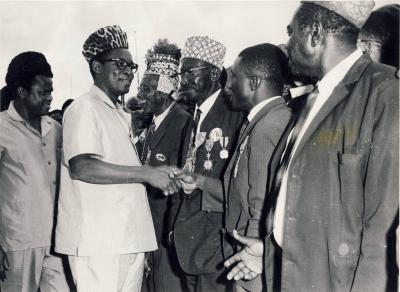 Joseph Mobutu and E. Tshisekedi at Mbuyi-Mayi the 3rd of March 1967
See a selection here

The Royal Museum for Central Africa (RMCA) preserves the archives of Jules Gérard-Libois (1923-2005) who was the founder of CEDAF (Centre d'études et de documentation africaines). This renowned centre has now been integrated into the RMCA as the division of Contemporary History. The archives of Jules Gérard-Libois contain, among other things, a major collection of photographs which tell of the events and actors leading up to the independence of Congo and the post-colonial period. The archives also contain sound recordings of the Belgo-Congolese round-table discussions of 1960 and a collection of works and publications.

The archives include items collected from 1958 to 2004, throughout the professional life of Gérard-Libois. These make reference to projects aimed at publishing work dedicated to the political development of the Congo and to Belgo-Congolese relations which are the main areas of research of the CRISP (Centre de recherche et d'information socio-politiques) which was also set up by Gérard-Libois. In particular these archives were meant to help Congolese researchers have access to reliable sources pertaining to the history of Congo.

The archives cover an extensive period of history of Congo ranging from the 1940s to the assumption of power by Laurent Désiré Kabila in 1997. An important series concerns the work of the Parliamentary Commission of Inquiry into the circumstances leading to the assassination in January 1961 of Patrice Lumumba, the first Congolese Prime Minister. J. Gérard-Libois sat on this commission as an expert from 2000 to 2001. The second series in order of importance deals with the role of Che Guevara in the Congolese guerrilla war of 1965. Other series cover Congo during World War II (1940-1945), the period preceding independence in 1960, the rebellions of the 1960s, the Mobutu regime (1965-1993), and the rise of Laurent Désiré Kabila (1979-1999).