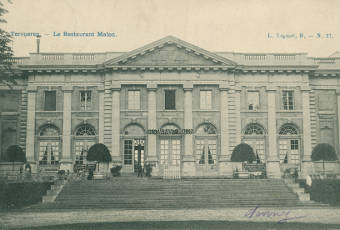 The origin of the AfricaMuseum dates back to the Brussels International Exposition of 1897.

At King Leopold II’s behest, The ‘Colonial Section’ of the exhibition was moved to the Africa Palace (formerly the ‘Colonial Palace’) in Tervuren. The exhibition halls were home to naturalised animals, geographic samples, commodities, Congolese ethnographic and artistic objects and art objects created in Belgium. An African village was recreated in the park and this was home to Congolese individuals during the day. Seven of these Congolese died during their time in the village.

Leopold II saw the museum as a propaganda tool for his colonial project, aimed at attracting investors and winning over the Belgian population. It was in 1898 that the temporary exhibition became the first permanent museum of the Congo. The institute has always served the dual purpose of a museum and scientific institute. 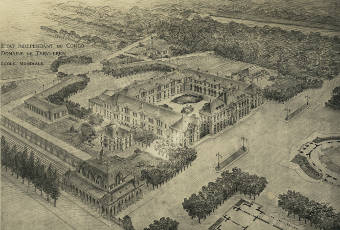 Very early on, the Africa Palace turned out to be too small. Leopold II called on the services of Charles Girault, architect of the Petit Palais in Paris, and embarked upon an ambitious construction programme. The plans were for a complete site with a new museum of the Congo, a world school, a congress centre, a station, Chinese pavilions and a sports centre.

The majority of the profits from the royal private domain of the Congo were used for the construction projects in Belgium.

In 1908, the Congo Free State became Belgian Congo and the museum, the Museum of Belgian Congo. Construction works were brought to a halt.

As Leopold II had died before the works were completed, it was King Albert 1st who inaugurated the museum on 30 April 1910.

The museum benefited from all modern comforts and was a real architectural masterpiece.

The Royal Museum of Central Africa

By the Royal Decree of 10 March 1952 the museum became the Royal Museum of the Belgian Congo.

When independence was declared, its name was changed to the Royal Museum of Central Africa, offering a broader range of studies.  Even today, two thirds of the staff and the budget of the AfricaMuseum are dedicated to scientific research.