The renovation of the AfricaMuseum

The AfricaMuseum reopened on 8 December 2018, after a five-year renovation.

When it came to the renovation, the big challenge was to present a contemporary and decolonised vision of Africa in a building which had been designed as a colonial museum.
Before the renovation, the permanent exhibition was outdated and its presentation not very critical of the colonial image. A new scenography was urgently required. As for the 1910 building, its infrastructure was no longer adapted to the requirements of a modern museum. 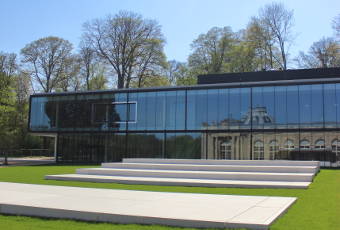 The visitor walks along the new underground gallery then heads into the basement of the former edifice, before resurfacing on the ground floor where the permanent exhibition is housed.

In the basement of the museum, an introductory exhibition looks at the past, the present and the future prospects of the institution. On the ground floor, the exhibition is divided up into five thematic zones, for the most part dedicated to Central Africa.

In the inner courtyard of the museum building, a light shaft has made it possible to create a space for musical workshops. The tiered seating is ideal for open air theatre.

The listed building was renovated and restored in keeping with the original plans which date back to the end of 19th century, whilst at the same time incorporating modern techniques. 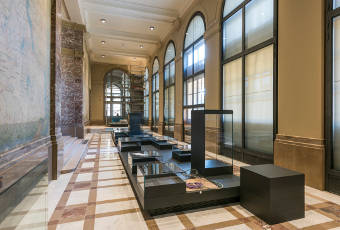 The total surface area accessible to the public has increased from 6,000 to 11,000m².  The scenography is the work of Niek Kortekaas and Johan Schelfhout. They have created a great balance between the restored listed windows and the new central platforms.

The introduction of contemporary art is an important element in the renovation process.
The Congolese artist, Aimé Mpané was attributed the large rotunda project and created the work Nouveau souffle ou le Congo bourgeonnant, a large sculpture which enters into dialogue with the statues of colonial origin.

Given the fact that the history of the AfricaMuseum and its collections is shared by Belgians and the people of Central Africa and their diaspora, the institution wanted to involve them in the development of the permanent exhibition.

Stages in the renovation process