New research shows how deforestation and population growth have greatly impacted landslide risk in the Kivu Rift. This is what researchers from KU Leuven, the Royal Museum for Central Africa and the Université Libre de Bruxelles established from an analysis of six decades of forest cover and population trends in the region. The study is published in Nature Sustainability.

Landslides near a gold mine in Luhwinja  in eastern DR Congo. The miners’ village is at the foot of the largest landslide. © Olivier Dewitte

Landslides occur in mountainous regions all over the world, causing thousands of fatalities each year. The strong population growth in recent decades, the associated increase in food demand, and the development of economic activities have incited more and more people to settle in steeper and thus more landslide-prone areas, often at the expense of natural ecosystems. Deforestation destabilizes the soil as tree roots decay, further increasing landslide hazard.

It is widely recognized that population pressure and associated land use change, such as deforestation, affect landslide disaster risk. However, strong evidence to support this was still lacking. Investigating these human-nature interactions is challenging, especially in the Global South, where historical landslide and forest records are scarce.

Historical perspective on the Kivu Rift

In a new study, researchers from the KU Leuven, the Royal Museum for Central Africa (RMCA) and the Université Libre de Bruxelles (ULB) uncover these interactions between humans, the environment and landslides in the Kivu Rift in Africa close to the equator. This densely populated region in Burundi, Rwanda and eastern DR Congo is highly sensitive to landslides, which are usually triggered by heavy rainfalls.

"We explore the link between population, deforestation and landslides: we evaluate changes in forest cover and demographic trends, and their impact on landslide risk, during no less than six decades," explains geographer Arthur Depicker (KU Leuven, RMCA).

The researchers relied on more than 2000 historical aerial photographs from 1958, kept at the RMCA. This collection allowed them to study land use and deforestation (or afforestation) from the end of the 1950s until 2016 - a much longer time span than only satellite images would allow.

The interaction between forest cover, population and landslides

"With our reconstruction, we were able to show that deforestation is often linked to smallholder  agriculture in this area, but also, indirectly, to mining activities in a soil rich of mineral resources. Deforestation has considerably increased landslide occurrence. Scientific literature suggests that the impact of such drastic changes in forest cover is far more important than the impact of climate change," Arthur Depicker says.

Landslides pose the greatest risk to society when they occur in densely populated areas. Depicker: "We expect the greatest number of fatalities where people are pushed to inhabit steep and mountainous areas, for example to produce food, but also as a result of conflicts or economic activities such as artisanal mining. It is precisely in steep terrain that landslides are most likely to occur, especially if deforestation is also at play".

"Finally, our research shows that landslide risk is not static, but changes over time. The historical legacy of deforestation and societal dynamics resonates in the landslide disaster risk to which people are exposed today," explains Arthur Depicker.

This research was conducted in the framework of the PAStECA project, a BRAIN-be project funded by the Belgian Federal Science Policy Office (BELSPO), and coordinated by the Royal Museum for Central Africa. 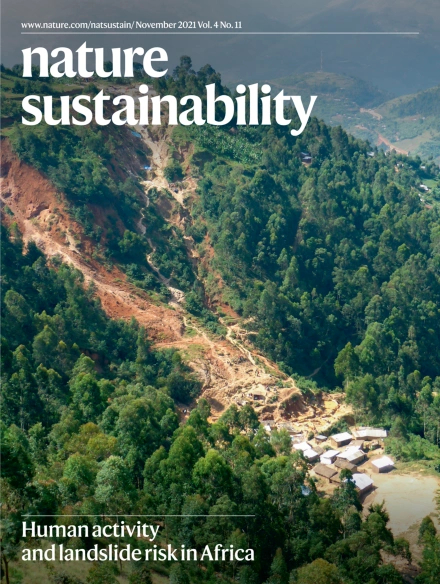