The geographical situation of Burundi 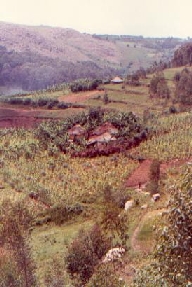 Burundi, a region of central Africa, is located between the 2°20' and the 4° 28' parallels of south latitude and between the 28° 50' and the 30° 53' meridians of east longitude. This country of 27.834 km2 is delimited by Rwanda in the North, Tanzania in the east and Zaire in the West. An old Precambrian plateau essentially constitutes it. This one has an average altitude of 1800m

The West border is part of the vast tectonic collapse: the Occidental branch of the "Rift Valleys" (+/- 800m) This region consists, in Burundi, of the valley of Imbo (70 km), crossed by the Rusizi River, which goes from the Kivu Lake to the Tanganyika Lake, of this last one and of a narrow coastal line. The width of this big rift varies considerably. It goes from 10 km width at the narrowest places of the Rusizi valley to 30 km in the lake region.

An almost continuous range of average mountains of which the highest peaks reach +/- 2700m separates de plateau and the "Rift Valley". This mountain ridge represents the borderline between the Zaire and Nil River basins. The west mountainside is a huge steep with a rough relief. It is characterized by an alternation of deep valleys and narrow mountain ridges. The hillside inclination often goes beyond 50 degrees. They are subjects to a high level of erosion and frequent landslides. In spite of this unfavorable situation, the region is highly populated and therefore largely developed. The mountainside, as well as the mountain ridges, is still partially covered by the ombrophilous forest and by some sort of a natural bamboo forest. 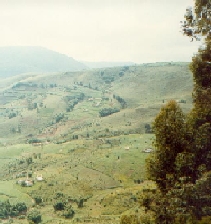 The east mountain versant smoothly links with the central high plateau region, which is crossed by lazy streamed big rivers. This round hills region is especially favorable for harvest, in particular in the heart of valleys, and for breeding, in the grassy heights. The Habitat is scattered but permanent, the traditional Rugo, a round hut with a fence, is bound to disappear. Rectangular clay huts, typical of the African landscape, replace it. The natural vegetal shelter has disappeared. Nevertheless some medicinal plants have been preserved. This region is the traditional Burundi. This is the Kings' territory where their big domains, which they almost never left, were spread. In the past, most of the population was living round the present villages of Kayanza, Ngozi, Bukere, Muramvya and Gitega. Those were the places where the wealthy people were the mightiest and where the liege peace was most guaranteed. This was certainly one of the reasons why the population was so high in this region. Another one results from a, for Africa, relatively healthy climate, which eases some of endemic and tropical diseases.

Finally, some other factors such as favorable rainfalls (1300 to1600 mm a year) and the presence of clay and fertile grounds, which thanks to harvest techniques and the constant coming of natural fertilizer from the big bovines' cattle, allowed two to three harvest a year. At the bottom east of the Zaire-Nile peak, we could find, from North to South, the most biggest of this domains: Mbuye, Bukeye, Muramvya and Kiganda. At last, in the east, the region of the high plateaus goes downhill in the huge Tanzanian plain by a rung of 400 m height, interrupted by deep faults. The plain of the Mosso, with a formerly low population but nowadays subject to a intensive growing of the population due to a demographic explosion, constitutes the Tanzanian region. In the past, a population classified as being different from the one on the high plateaus inhabited the Mosso region.