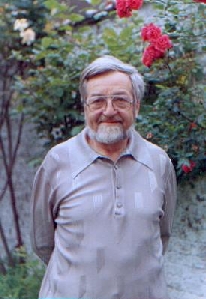 Ordained as a missionary priest at the age of 27 in the congregation of the White Fathers of Africa, R. P. Rodegem left for Burundi in 1947. The founder of the order, Mgr. Lavigerie, recommended that his missionaries dedicate a substantial part of their time to the study of the local language. R. P. Rodegem applied himself so well to the task that he became an internationally recognised expert of the kirundi language.

Nothing escaped the perspicacity of his eternally curious mind and so he naturally widened his field of investigation to the history and the local customs. After about twenty years spent in Burundi, he returned to his country with a prodigious amount of material. A. H. Meeussen, at the time leader of African linguistics in Belgium, urged him to pursue and complete a Ph.D. at the University of Paris. Once this objective achieved, the congregation gave R. P. Rodegem a break of four years in order to prepare and publish for the Royal Museum of Central Africa a Rundi-French dictionary, now considered as the best in the bantoue language.

Later, in 1973, the " Anthology rundi " was published at Armand Collin and was completed, in 1983, by " Words of Wisdom in Burundi " published at Peeters. These two publications are exhaustive compilations of commented proverbs, tales and legends which are particularly numerous in a country rooted in the oral tradition.

We cannot quote the whole of his bibliography, touching on all aspects of life in Burundi. As a missionary and researcher, R. P. Rodegem leaves behind him a legacy of which one cannot even measure the importance for Burundi today. One day it will be rediscovered. The publications will then provide a basis for the study of the oral literary patrimony of this country.

After our stay of 5 years in Africa, we consulted him about our studies of the healing plants of Burundi.
It is he who advised us to publish the results.
His assistance, particularly in the linguistic field, was a constant encouragement for us.