Plate tectonics played an important role in the evolution of our planet. It may also have a significant impact on its sustained habitability. However, plate tectonics on Earth did not always function as today. Knowing when the current geodynamic regime has begun, is yet an enigma for geologists. A study conducted by an international team of researchers, including geologist Daniel Baudet of the RMCA, has now found the earliest evidence known for the modern-style plate tectonics at 2.2-2.1 billion years ago (2.2-2.1 Ga). These important results are published in the journal Nature Scientific Reports.

Plate tectonics and evolution on Earth…

Understanding plate tectonics helps us to explain phenomena such as earthquakes, volcanoes or mountains building. Characterizing the transition from ancient to modern-style geodynamics regime, including plate tectonics, is crucial to understand the evolution of our planet. The appearance of plate tectonics had important impacts on life evolution on our planet. It has led to an increased supply of nutrients, more diverse ecological niches and geographic isolation leading to increased biodiversity, variable climatic conditions and oceanic circulation, as well as volcanic gases that may have influenced the composition of our atmosphere.

Understanding the geodynamics on Earth also allows us to compare our model to other rocky planets in our solar system and to test their habitability. The Earth, 4.5 billion years old, is the only planet in the solar system with a lithosphere composed of plates that interact with each other. Hence, understanding the geodynamic processes of the Early Earth is crucial because they have strong implications for the habitability of the Earth but also for other planets.

Key in this study, revealing that modern plate tectonics have been operational for several billion years, is a rock the size of a child’s fist of the eclogite type. Eclogites are metamorphic rocks that form at great depths under high pressure conditions. The eclogite discovered in the Democratic Republic of the Congo (Kasaï craton) and conserved in the RMCA collection, is a low temperature type. The scientists characterized it as the oldest known eclogite of this type worldwide: it is no less than 2089 million years old (2.1 Ga). 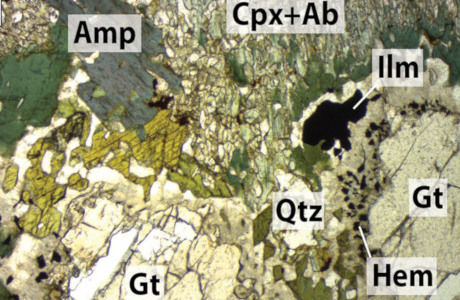 An eclogite discovered in Congo (Kasaï craton) and conserved in the RMCA collection of 2089 million years old, is the oldest known low temperature eclogite worldwide

... as evidence of modern plate tectonics?

This type of rocks, eclogites, are an important source of information for studying the evolution of plate tectonics, since they are produced in one of the present-day geodynamic processes, namely subduction. Scientists can see them as ‘evidence’ of modern plate tectonics.

Subduction occurs when an oceanic plate (dense, thin and cold because in contact with water) meets a continental plate (less dense and thicker), and  sinks under the continental plate into the Earth's mantle. Scientists have determined that the rock of origin of this eclogite (the protolith) was formed 2216 million years ago (2.2 Ga), before it was subsequently buried at great depth in the mantle by subduction at less than 55 km, and was exhumed to the surface afterwards – the process of which the eclogite is the result. This complete cycle of formation and closure of an ocean is called a Wilson cycle, lasting about 130 million years.

The eclogite and its protolith dating respectively 2.1 and 2.2 Ga thus provide evidence that modern style plate tectonics began at least since that period, and have been operational at least since the Paleoproterozoic.