Researchers at Harvard University have reconstructed the genomes of four skeletons. Two of them are about 8,000 years old and the other two, about 3,000 years old. The study provides insight into the diversity of distribution and differentiation in sub-Saharan Africa.

This research, published in Nature, is the result of a multidisciplinary and international collaboration including researchers of the Université libre de Bruxelles, the Royal Museum for Central Africa, the Royal Belgian Institute of Natural Sciences and the Université Yaoundé I.

The story begins in the 1990s, on the site of Shum Laka, near the town of Bamenda, in northwestern Cameroon. This 1200 m² rock shelter is located behind a waterfall, at an altitude of 1600 m on the side of a volcano.

This part of west-central Africa has been identified as the probable cradle of Bantu languages, the most widespread and diverse group of languages in Africa today. It is thought that, more than 3,000 years ago,  Bantu speakers spread from this region further south, all over the subcontinent, as far as South Africa and the coast of the Indian Ocean. But their area of origin remained a blind spot on the archaeological map.

Pierre de Maret, professor at the Université libre de Bruxelles (ULB), led the excavations on the Shum Laka site, in collaboration with Els Cornelissen of the Royal Museum for Central Africa and Raymond Assombang of the University of Yaoundé. Between 1991 and 1994, researchers unearthed the oldest available human remains in this boundary zone between West and Central Africa: 18 human skeletons belonging to two funerary phases, one approximately 8,000 years old, the other 3,000 years old. 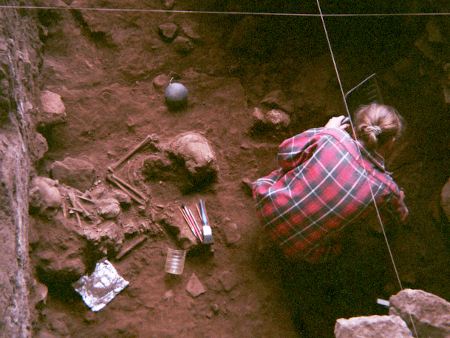 The DNA of four skeletons

‘Reconstructing these skeleton’s genomes would help us determine which contemporary populations are descendants of the archaeological skeletons, and identify possible links between the people from these two funerary phases’, says Pierre de Maret.

However, DNA doesn’t conserve well in a warm and humid environment, such as in this part of Africa. After several unsuccessful attempts, a team from Harvard University managed to reconstruct the entire genome of four skeletons, two from 8,000 years ago and two from 3,000 years ago.

Continuity of habitation in the region

The oldest skeletons are those of two boys who were buried on top of each other. The youngest was about four years old at his death and the oldest about 15 years old. They appear to be related to each other in the fourth grade. The researchers also found that the teenager has a particularly rare A00 haplotype on his Y chromosome that is currently found only in that region of Africa. It's the first time this haplotype has been identified in ancient DNA.

The two more recent skeletons are those of a boy about eight years old and a girl about four years old. They are second-degree relatives, either uncle/niece or aunt/nephew.

Despite the nearly 5,000 years that separate the two burial phases, the genomes of the four individuals are very close to each other. This indicates a remarkable continuity of habitation in the region.

Surprise: more closely related to the hunter-gatherers of Central Africa

Researchers then compared the genetic data with the data available for different populations in sub-Saharan Africa.

‘Surprisingly, these four genomes are much more closely related to those of Central African hunter-gatherers than to the Bantu agricultural populations. Genetically, the four individuals are close to an ancient basal West African population and at the same time, but to a lesser extent, to those of Central African hunter-gatherers,' says Pierre de Maret.

The study, which was published in Nature on 22 January 2020, also contributes to the reconstruction of Homo sapiens populations in Africa. Based on what we now know, there are at least four modern human lineages that diversified around 250,000 to 200,000 years ago, and are found in humans today. This provides further support to the archaeological data revealing the importance of this period in the deep history of modern humans in Africa.

The study brought together 33 authors from 8 different countries and several disciplines.

The archaeological excavations were financed by the FNRS, the RMCA and the ULB.