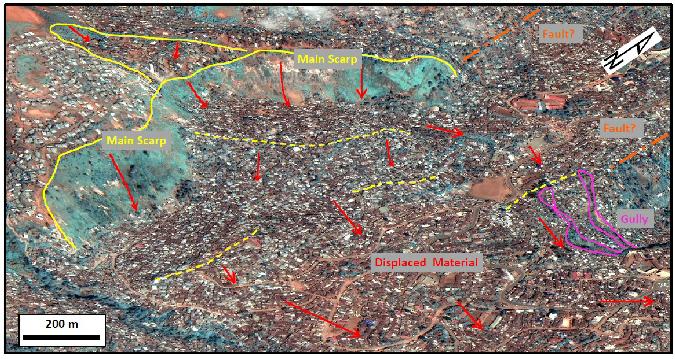 Context: Ground deformations in urban areas are environmental constraints that need to be considered in planning and risk management. Characterization of such deformations requires combination of several techniques, adapted to the deformation dynamics and urban context. Here, the city of Bukavu (DR Congo) and its rural environment is chosen as experimental test site for comparing and integrating deformation monitoring by multiple sensors and techniques. This rapidly expanding city is set in a landslide-prone environment. In the mother-RESIST project, the InSAR PSI, SBAS and MSBAS techniques provided promising preliminary results on landslide displacements within Bukavu. Here, in the framework of a PhD research, we will continue using these techniques with additional image acquisitions allowing us to extent deformation time series, in combination with techniques using optical imageries. Satellite COSMO-SkyMED, Sentinel-1, Pléiades and SPOT-6, SPOT-7 data will be used in combination. Targeted ground-based UAV and  epeated DGPS measurement campaigns using the RESIST GPS reference network will provide topographic data at higher spatial and temporal resolutions to complement these time series and validate displacement results. Image correlation methods will be applied on both SAR (amplitude images) and optical data (high-resolution satellite, time-lapse and UAV images). The time series will be complemented with historical aerial photographs (digital photogrammetry) to assess the changes over the last 60 years, enabling to compare long- and short-term trends with climatic and land use change data. All these dynamics data, together with high topographic elevation models derived from optical data will be used to better characterize the mechanisms of two large slow-moving landslides in space and time. One is a thousand-year-old landslide sited in the rapidly expanding city of Bukavu that experienced rapid and informal urbanisation over the last decades. The second is only a few decades old and has been largely preserved from anthropogenic activity. These two landslides share rather similar environmental conditions at the notable exception of the human influence. Together, they thus represent perfect natural laboratories to unravel the respective influences of the environment (climate, geology, tectonics settings, etc.) and external forcings (rainfalls, earthquakes, urbanisation) on landslides processes.

1) We first analyse the causes and the triggers behind the origin and evolution of the landslide largely preserved from human influence. A 60-years record of the landslide activity shows that the influence of rainfall and earthquakes (i.e., the commonly recognised triggers of slope instability) on the timing of the initiation of the landslide and its main subsequent deformation phases is not that straightforward. Instead, it stresses the importance of considering weathered-related weakening of the slope material through time as a major cause of slope instability – i.e., intrinsic mechanisms of hillslope evolution.

2) After an exploration of the causes behind the occurrence of landslides in tropical environment, we analyse what are the main controls on the motions of the two landslides. For both, detailed analysis of the movement reveals a surprisingly tied relationship between landslide motion and rainfall-induced water changes in the slope, stressing intricated influences from climate, weathering, tectonics, and (sub)surface hydrology. Our work also emphasises how internal landslide dynamics (extension, compression, material redistribution, etc.) and interactions between different landslide units exert strong controls on the overall landslide motion. We document the acceleration of a large section of the urban landslide alongside its urbanisation and show it is driven by self-reinforcing feedbacks involving slope movement, rerouting of water flows and pipes rupture. Such relationship is not surprising given the influence of urbanisation on slope hydrology and how slope hydrology in turn regulates the motion of slow-moving landslides. Yet, this observation calls for a better understanding of how anthropogenic activity influences surface processes, notably considering that hillslopes of the world’s cities are being urbanised at accelerating paces.

3) By highlighting these relationships, this project, framed around a PhD research, helps improve the evaluation of landslide hazard and mitigation in the area, but also across many other regions of the tropics where similar environmental and societal conditions are met. These findings also have wider implications for our
understanding of landslide dynamics and how humans are interfering with landscape evolution. We finally hope this work will contribute to highlight the importance of giving sufficient attention to Earth surface processes in tropical contexts. There, rates and relative importance of dynamic processes can indeed be different from temperate or paraglacial regions where most of the attention is set.