The debate about restitution of African heritage has recently received broad political and public attention. However, the debate mostly involves actors in Europe. What do Africans in Africa think about the issue? The debate so far shows little concern for their wishes and priorities.

The Transformative Heritage project of the Royal Museum for Central Africa, Université de l’Uele, University of Ghent and the Institute of Development Policy aims to fill that gap in the debate. Vicky Van Bockhaven (UGent): “UNESCO has been promoting culture and heritage as important sources of wellbeing and social cohesion in processes of sustainable development for decades. However, it remains an assumption, without much research underpinning it. Success is difficult to quantify, and only in the long term. In the current climate around issues of restitution, it is really important to investigate whether such claims hold truth.”

Researchers of the Transformative Heritage project will open a dialogue with communities in the Northeast of the Democratic Republic of the Congo about their needs and wishes regarding the heritage, which is kept in Belgium. The AfricaMuseum’s digital collection database will be made available. Hein Vanhee (AfricaMuseum): “Digital reconnection to heritage is a quick and efficient way of starting new conversations about the past, in a way that these conversations are directed by the local communities themselves. Their direct involvement is key.”

It’s important to note that digital reconnection can never be a substitute for material restitution. It will help develop a model for a meaningful and holistic approach to the restitution of cultural heritage.

“The Northeast of Congo has a rich cultural-historical past,” says Kristof Titeca (IOB), “but the region became increasingly isolated politically and economically after independence. It was struck by violent conflict in the years following independence. More recently, there has been an inflow of poachers and armed groups, but also of artisanal miners and refugees.”

Roger Gaise of the Université de l’Uele in Congo adds: “In this region, the loss of traditions and heritage is seen as an explanation for society’s – bad – state. UniUele keeps the finger on the pulse for this project: we are researching the wishes and needs surrounding heritage within the communities. Are they even interested, and how can engagement with heritage be beneficial to them? How can we address these wishes and needs? Digital reconnection is a first step in addressing the sense of uprootedness. Traditional leaders and other local stakeholders are important interlocutors in these discussions.”

Vicky Van Bockhaven: “It’s important to note that digital reconnection can never be a substitute for material restitution. However, material restitution requires a legal framework and meticulous investigations, which require time. For us, the Transformative Heritage project is a significant intermediary step, a test case to gather knowledge on the support for reconnection to this heritage within local communities. We are looking at important ethical, scientific and legal questions on issues such as ownership and copyrights, for example, that will also be relevant to material restitution.” 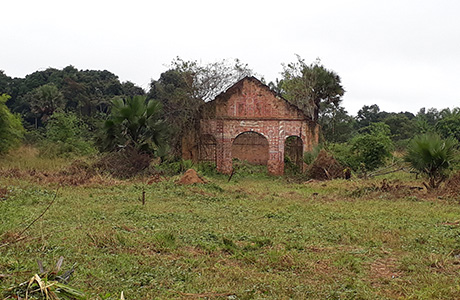 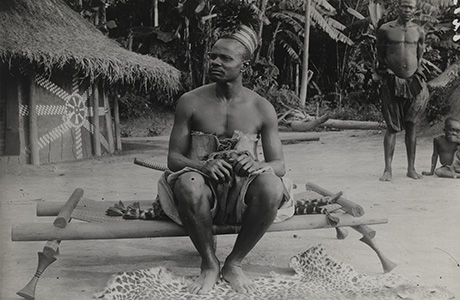 Chef Djabir with a painted house in the background. Bas-Uele, DRC [Azande]. Photograph taken during the expedition led by A. Hutereau, 1910-12. Collection RMCA Tervuren, AP.0.0.12198.

How will this digital reconnection be organized? Hein Vanhee: “Regional universities and teacher training colleges will get access to the database. We’ll organize workshops to teach them how to use the data. How they decide to use it, is entirely up to them. For example, they can use data for educational or research purposes. Or they can look for stolen, looted or lost artefacts from the region. We are hoping that creative initiatives will arise, even outside of the project. The project also wants to bridge the digital gap between urban ‘elites’ and the rural communities.”

Transformative Heritage researchers will investigate whether reconnection can aid in improving social cohesion and wellbeing in local communities. Maybe it can even help in peacebuilding. New conversations about the shared past can stimulate dialogue between communities about potential solutions for contemporary issues.

Kristof Titeca: “Local researchers will look into developing custom-made applications for local communities. For example, they can help organize intergenerational storytelling events. Photographs and data from the digital collection can also inspire artists during workshops. However, we also need to be aware that knowledge about the past and heritage also has the capacity to divide.”

“Focusing on digital reconnection will help develop a model for a meaningful and holistic approach to the restitution of cultural heritage”, says Vicky Van Bockhaven. “A model that is fundamentally based on consultation and cooperation with stakeholders in both Europe and Africa.”

Hein Vanhee agrees. “In a later phase, when material restitution will be legally possible, the development of a structural dialogue and cooperation on the issue of heritage will prove useful for preparing legal frameworks for material restitution. This project is a first step.”