The last king of Rwanda

King Kigeli V Ndahindurwa (1936-2016) was the last king of Rwanda. His short reign from 1959 to 1961 as Mwami of Rwanda, then under Belgian trusteeship, was very eventful. A biographical note on this personality and almost 1600 other important figures from the colonial history of DR Congo, Rwanda and Burundi can be found on the AfricaMuseum's online archive platform. This platform also offers a powerful search engine in the archive inventory.

During his triumphal tour of Rwanda, King Kigeli V Ndahindurwa was welcomed at the Musha mining centre by the director of MINETAIN, Pierre-Joseph Olbrechts, as well as by a large crowd of workers and their families. The king's retinue is composed of his secretary, Jean-Berchmans Kimenyi, and the Belgian resident, André Preud'homme.
(HP.1959.28.900, collection RMCA Tervuren ; photo P. Laval (Inforcongo), 1959, MRAC Tervuren ©)

Jean-Baptiste Ndahindurwa is the son of the deposed king Yuhi V Musinga. After the death of his father in 1944, the eight-year-old Ndahindurwa returned to Rwanda with his mother, Bernadette Mukashema, after the family's exile in the Belgian Congo.

Following the sudden death of his half-brother, King Mutara III Rudahigwa, on 25 July 1959, Jean-Baptiste Ndahindurwa succeeded him as head of the Rwandan kingdom in circumstances considered a coup d'état by the Belgian authorities. Ndahindurwa, then 23 years old, was given the dynastic name of Kigeli V.

Out of favour with the Belgians

Shortly afterwards, the Rwandan political landscape was divided into roughly two camps: pro-Belgian rule and pro-independence. The Belgian colonial administration transformed this division into an ethnic conflict between pro-Belgian Hutus and indepencence-minded Tutsis. Himself born a Tutsi, Kigeli V was quickly labelled as anti-Belgian.

Riots broke out at the beginning of November 1959. Kigeli V tried in vain to calm the situation but was opposed by the Belgian administration. The latter wanted to abolish the Rwandan monarchy and establish a pro-Belgian republic dominated by Hutus. Taking advantage of Kigeli V's stay in Congo in May 1960, the Belgian administration in Ruanda-Urundi declared him persona non grata and opposed his return to Rwanda.

However, the United Nations intervened and ordered Belgium in December 1960 to facilitate Kigeli V's return to Rwanda and to organise a referendum on the continuation of the monarchy. The Belgian administration did not accept this and, together with the leaders of the Hutu political parties, they organised a meeting in January 1961 (the 'Gitarama coup'), which voted for the abolition of the monarchy, the deposition of Kigeli V and the establishment of a republic. The UN then imposed a referendum. It resulted in the rejection of the monarchy and of King Kigeli V and in the introduction of a republican regime. Rwanda became independent on 1 July 1962 with Grégoire Kayibanda as president (1962-1973).

Exiled to the United States

Under the rule of President Juvénal Habyarimana (1973-1994), Kigeli V Ndahindurwa feared for his life and fled to the United States in 1992. He continued to look after the welfare of Rwandan refugees and closely followed the political situation in Rwanda. After the genocide against the Tutsis, which resulted in more than a million deaths, he supported the reconstruction of Rwanda and the Rwandan refugees scattered around the world.

King Kigeli V died in the United States in 2016, unmarried and without an official heir, in accordance with the rules of the Rwandan royal family that prohibit marriage and procreation of a Rwandan monarch in exile.

The website archives.africamuseum.be is the online archive platform of the AfricaMuseum. Apart from being a powerful search engine to browse the 3 km of historical archives kept at the museum, it also offers a wealth of information to researchers and citizens who want to delve into a subject.

For example, the extensive information on the life and work of the last king of Rwanda is just one of the nearly 1,600 biographical notes on important figures in the colonial history of the DR Congo, Rwanda and Burundi on this website.

With this platform, the museum aims to provide interested parties anywhere in the world with an online searchable inventory and a practical research tool. 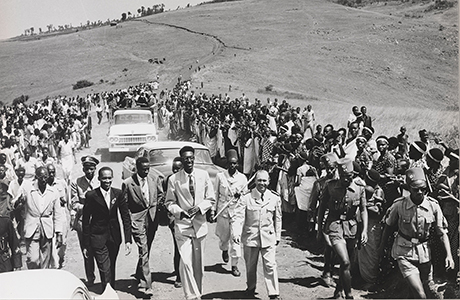 King Kigeli V Ndahindurwa on a triumphal tour of Rwanda. He is shown here on the edge of the territories of Kigali and Kibungu on 13 August 1959, accompanied by the clerk Alexis Karekezi, the chiefs Pierre Mungarulire and Louis Ndahiro, his secretary Jean-Berchmans Kimenyi and the Belgian resident of Rwanda, André Preud'homme.
(HP.2009.3.878, collection RMCA Tervuren ; photo P. Laval (Inforcongo), 1959, RMCA Tervuren ©) 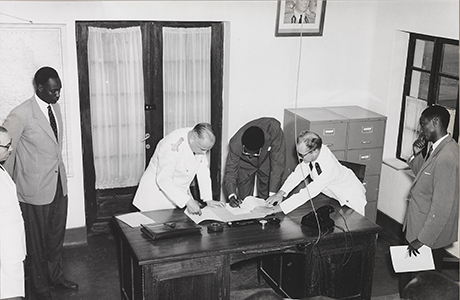 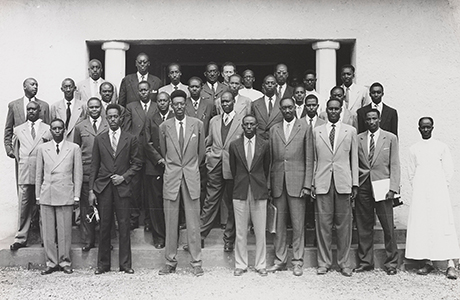 After being sworn in as constitutional monarch, King Kigeli V Ndahindurwa is surrounded by the members of the High Council of the Country (Kigali, Rwanda) on 9 October 1959.
(HP.1959.28.1046, collection RMCA Tervuren ; photo P. Laval (Inforcongo), 1959, RMCA Tervuren ©) 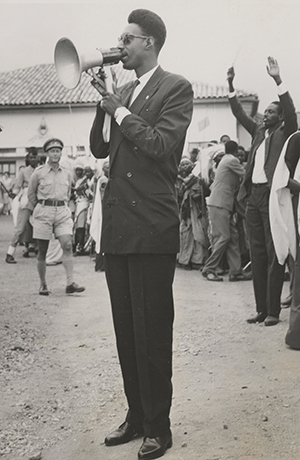 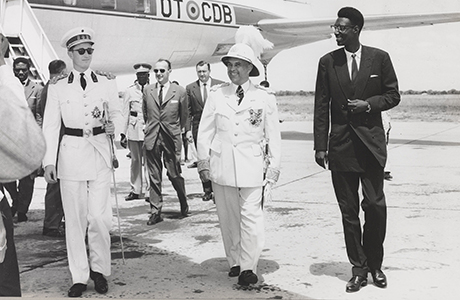