In Upemba National Park in south DRC, researchers have identified a new fish species (Enteromius thespesios) which shows a striking difference in colour between males and females. The task of mapping out the exceptional diversity of fishes in the Congo Basin falls to the RMCA partnership project, which is made up of six African partners. Protecting the rich and unique fish stock in the world's second largest river basin is a matter that calls for greater attention.

To mark its welcome appearance, a five centimetre fish of the genus Enteromius (Barbus family) was named thespesios, meaning ‘wondrous one’ in Greek. ‘The remarkable thing about this species is that males and females are easily told apart by the bright red flash on some of the fins and differences in body proportions’, explains Congolese PhD student Bauchet Katemo Manda (KU Leuven/Université de Lubumbashi/RMCA). This pronounced colour and shape-related sexual dimorphism is unique in this genus of African freshwater fish. ‘The lifecycle of this little fish is in need of further study to discover whether or not there is a link to territorial behaviour and/or male brood care’, says the ichthyologist (fish biologist). 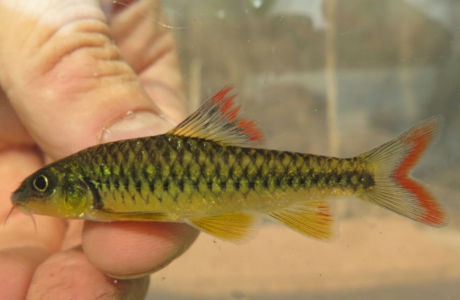 Male of the species Enteromius thespesios, with bright red colouring on the fins. © RMCA 2016

This exceptional fish is just one of the many newly described species in Upemba Park. Recent fieldwork and research has doubled the number of fish species known to exist in this national park. ‘It is already known as a hotspot for fish diversity. But many of the other protected nature reserves don't yet have a list of the fish species they contain’, says researcher Bauchet Katemo Manda. The parks were originally set up to protect the large mammals and extraordinary landscapes.

When it comes to fishes, the Congo Basin is the most diverse river system in Africa, yet it is still one of the least known. The task of mapping fish diversity in ten of the region's nature reserves falls to the Mbisa-Congo project, a partnership which was set up between the RMCA and six partners from the DRC, the Republic of the Congo and Burundi in 2013 and is funded through the Directorate General of Cooperation Development and Humanitarian Aid. ‘The first step is to document the size of the fish diversity in the rivers and the extent of the distribution, which for some species is very limited,’ says ichthyologist Emmanuel Vreven (RMCA).

Out of sight, out of mind

Fishes are often a forgotten corner of biodiversity and given low priority in conservation policies. The list of protected animal species in the DRC contains just one freshwater fish, although many of the species are found nowhere else in the world. ‘Through the Mbisa project we want increase awareness that, alongside the iconic large mammals, freshwater fauna should be more fully incorporated in the conservation and management policies in place in these protected areas. The existing nature reserves were not conceived with this in mind, certainly not in terms of how they were set out’, adds fish biologist Emmanuel Vreven.

The aquatic environments in protected areas are in need of greater attention. ‘For example, the Luvilombo river, one of the habitats of the newly described fish species, is occasionally drained to irrigate the farmland. Even more disconcerting are the plans to construct a dam on the lower Lufira river, which is right in the heart of Upemba Park’, explains Emmanuel Vreven. ‘A move like this in a core zone, by definition an area in which we would seek maximum protection against negative human effects, will no doubt impact the aquatic fauna and flora, even if it is only a reservoir on a section of the river’, says the researcher. 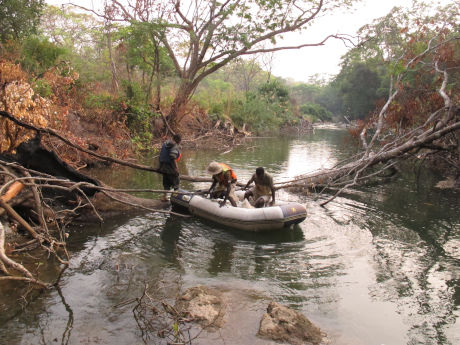 The researchers during their fieldwork in the Upemba National Park. 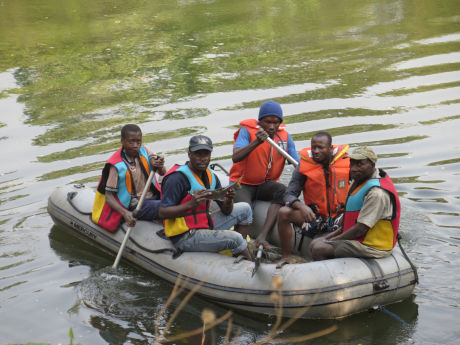 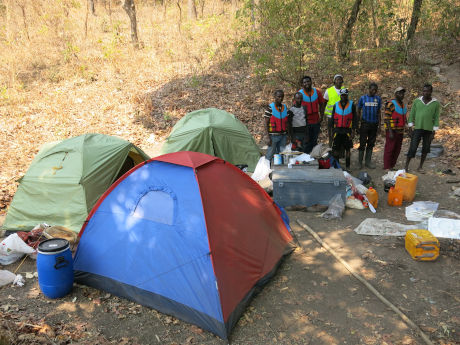