The Mbisa-Congo project contributed to a special issue of the Journal of Fish Biology with four articles, the first authors of which are all Congolese.

The Journal of Fish Biology published a special issue in May 2020: The Biology and Ecology of African Freshwater Fishes. The Mbisa-Congo project contributed to this issue with four articles. These four articles have as first authors Micheline Kasongo Ilunga, Taylor Mamba Baba, Christian Mukweze Mulelenu (all three pursuing a DEA) and Bauchet Katemo Manda (completing a PhD thesis). This is the first time that Congolese scientists have contributed on this scale to a special issue, with new taxonomic knowledge of fish in the Congo Basin. By combining morphological and genetic analyses, each article describes at least one new species for the Congo Basin, belonging to very diverse families and genera. These articles also focus on the importance and obstacles to the conservation of the fish fauna of the Congo Basin.

The Mbisa-Congo project was launched in 2013. Funded by the Belgian Development Cooperation (DGD), the project aims to study fish in ten protected areas - one in the Republic of Congo, two in Burundi and seven in DR Congo - whose rivers are all part of the Congo Basin. The objective is to document as much as possible the diversity of fish in each of these protected areas and to formulate proposals for better conservation and sustainable management of this still largely unknown fauna. The project is being carried out by the Royal Museum for Central Africa in collaboration with the University of Kisangani, the Institut supérieur pédagogique of Mbanza-Ngungu, the University of Lubumbashi, the Centre de Recherche en Hydrobiologie (Uvira), the University of Burundi and the Marien Ngouabi University (Brazzaville). The other major component of the Mbisa-Congo project is to train experts in fish research in the Congo Basin at each of these institutions. The project thus combines research and training. 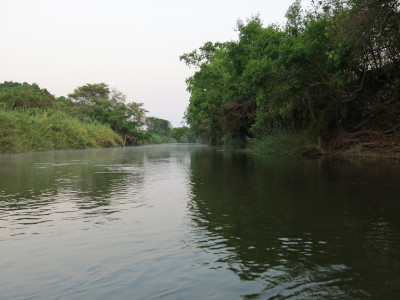