Public defence of the PhD thesis of Emmanuel Abwe

On January 19, 2022, Emmanuel Abwe (UNILU: DR Congo) publicly defended his doctoral thesis at the KU Leuven on the diversity and conservation of the fishes of the Kundelungu National Park (KNP). The members of the jury appreciated the corrections made to the first version of the manuscript, the educational presentation and the mature answers to questions during the public defence itself.

This doctoral thesis has provided, for the first time, the most comprehensive compilation of fish diversity and distribution in and around the KNP and this on and around the Kundelungu Plateau. Indeed, about 96 fish species have been recorded in the KNP and its surroundings, of which 38 are strictly endemic, including 26 new or likely new species to science. In addition, this work also demonstrated that the middle Lufira, which is separated from the lower Lufira by the Kyubo falls, shares very few species with the latter, i.e. only 29 (38%) species. This clearly demonstrates the role of the falls as an actual barrier to fish dispersal, especially from down to upstream. On the other hand, it shares almost the same number of species (31 or 40%) with the upper Zambezi, and even more species (i.e. 49 or 64%) with the Luapula-Mweru, to which it is currently not connected anymore. This points to the role of paleo-river connections in current fish distribution. Indeed the paleo-Lufira, and the upper paleo-Luapula both flowed south, and were connected for a long time to the Zambezi via the paleo-Chambeshi until very recently (~ 1.8 million years). Finally, this thesis demonstrates that some species once considered to have wide distributions, rather represent species complexes, actually containing several endemic species, not closely related to the species to which they were once attributed.

Unfortunately, this fish fauna is threatened by several anthropogenic activities, including harmful fishing practices [poisoning, small mesh-size nets coupled with disturbing blows of the sticks "Matumpulo" (in the local Bantu language Sanga), barriers and various kinds of traps], the mining and/or agricultural pollution, etc. In addition, the disappearance of wild mammals and the human population growth in and around KNP increases the fishing pressure on the KNP fish.

More information on Emmanuel Abwe's PhD in English or in Dutch. 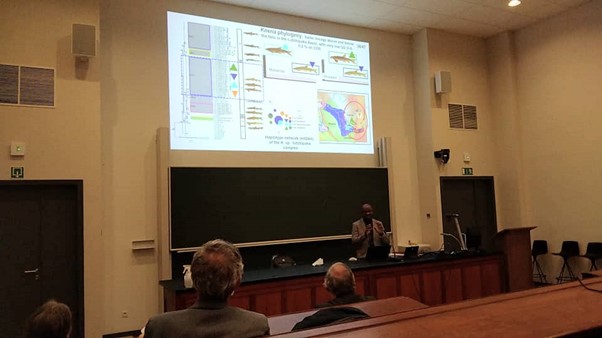 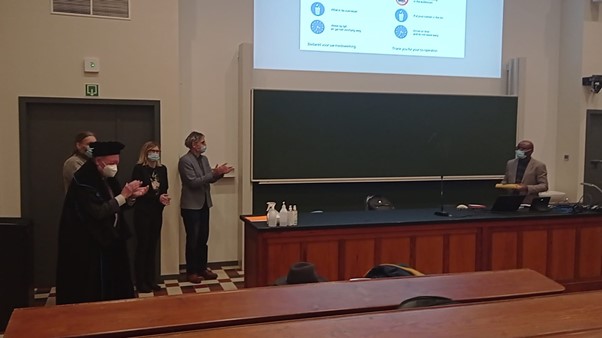 The cheers of some members of the jury physically present at the defense after the proclamation of the results of the PhD defense of Emmanuel Abwe (19/01/2022). 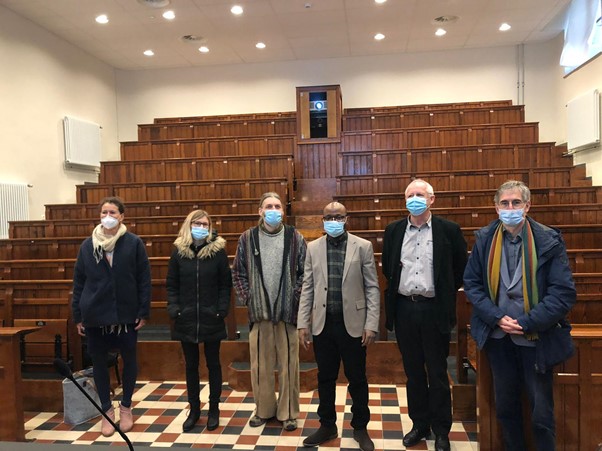 Some jury members and the head of the framework agreement of the RMCA, and Emmanuel Abwe himself, present at the public defence (19/01/2022).