This mask and costume was bought in October 1997 by the Belgian anthropologist Boris Wastiau, then curator of the museum, from the Lenga Navo cultural group near the small town of Zambezi in north-western Zambia.

The acquisition followed on from Wastiau’s doctoral research, which he submitted in the same year, based on 18 months of anthropological fieldwork carried out between 1994 and 1995.

Through this experience, Wastiau had acquired detailed knowledge of the cultural context, and in particular of the initiation rites known as mukanda, in which this type of mask was used.

Although he did not collect any items during the course of his doctoral research, Wastiau’s subsequent missions for the museum from 1997 onwards aimed to build up a collection covering the diversity of the material culture of this region (152 objects were gathered between 1997 and 2002), with a view to creating an exhibition.

Using a network of contacts built up over several years, the anthropologist called on Zambian interlocutors who best knew the region or village concerned. Kenneth Musangu Chinyama, in particular, accompanied him during this mission. His role as main assistant consisted of acting as an interpreter but also identifying interlocutors and objects.

Indeed, the local traditional, civic and police authorities had to be first informed of the collections, in the interests of transparency and respect for rules and traditions. It was in this context that this mask was purchased directly from its creator, Kenneth K. Lizambo, with the agreement of his group.

All the expenses incurred during the mission were accounted for.

The accuracy of the accounting data not only sets out the full details of the expenses, but above all the names of the Zambian informants, guides and intermediaries who accompanied the Belgian researcher in his collections and acquisitions in 1997: Kenneth (Musangu) Chinyama in the village of Mize, and Yona Mbalakanyi (junior), in Chingala village, Zambezi. 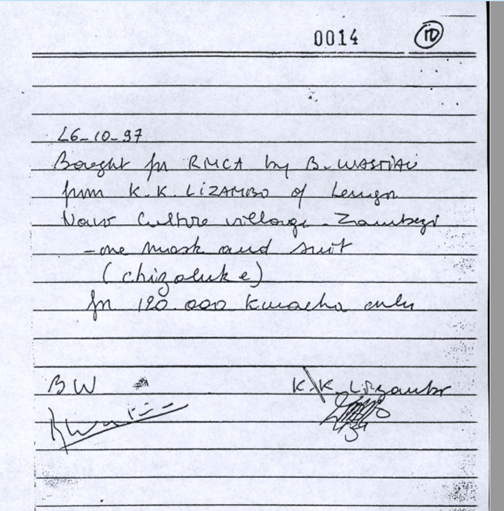 Accounting sheet for the purchase of the mask and its costume.

For each object bought, the researcher entered into a receipt booklet the date, the place, the identity of the seller, the amount and the description of the acquisition.

Beyond this detailed information, the acquisition of this mask is particularly well documented as it concerns a contemporary object whose author/creator is also the seller (see video interview of Kenneth K. Lizambo, 1997). Earlier curators at the museum focused more on collecting items chosen for their age, rather than this type of contemporary acquisition.

The photos below were taken in 1997 by anthropologist Manuel Jordan. They show the museum’s Cizaluke mask during a performance, shortly before it was acquired by Boris Wastiau.

These photos were all taken during the annual likumbi lya Mize (literally: ‘day of Mize’) ceremony, Mize being the cultural capital of the Luvale people of Zambia.

The Cizaluke mask is accompanied here by two other Visaluke masks (Visaluke being the plural of Cizaluke). All three are secular masks by Kenneth Kapalu Lizambo belonging to the Lenga Navo group and are recognisable by the style and the ‘fluorescent’ colours introduced into the costumes.

Two photographs showing the museum mask during the ceremonies for the confirmation of the Luvale’s senior chief: 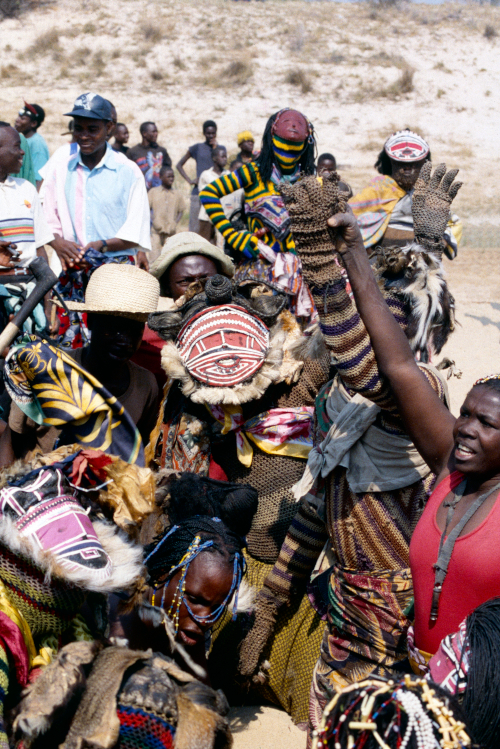 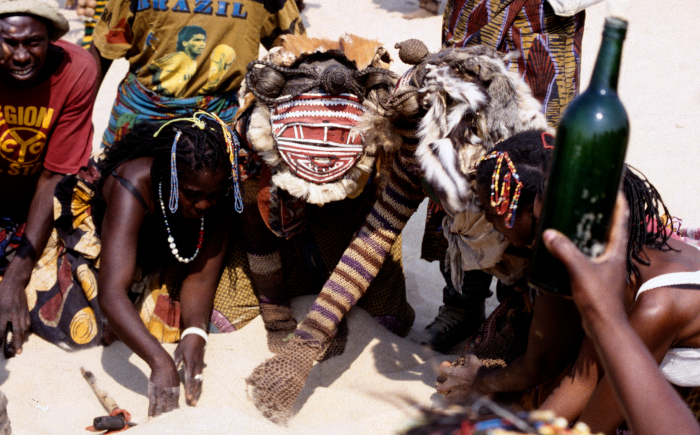 Other objects collected by Boris Wastiau on display at the AfricaMuseum:

While the presence of the costume and its accessories (belt, adze) draws attention to this particular mask, other objects gathered by Boris Wastiau are also exhibited in the room Rituals and Ceremonies (pictures above): these include four masks – two of which were collected during the same mission in 1997 – but also two paintings. As their titles indicate, these works by Stephen Kappata (1936-2007) are part of the artist’s reflection on the evolution of traditions (rupture and continuity), in this case that of Makashi masquerades.

These paintings – undated (but prior to 2002) – thus refer directly to the contemporary dimension of the cultural objects presented in this display case.

However, as in the rest of the museum, the bulk of the collections in this room were acquired by the institution during the Belgian colonial period.

In the 1980s and 1990s, the museum’s missions policy was very dynamic, with the aim of directing the development of collections to the whole of the African continent (e.g. North Africa, East Africa, Côte d'Ivoire and Southern Africa), but also towards the rest of the world (e.g. Brazil). Within the Ethnography section, collecting was seen as one of the main tasks of the position of curator.

Although recent, this policy of massively increasing the collections through field missions has unfortunately been no guarantee of optimal documentation of artefacts in current inventories and databases. This could also be explained by the fact that, since the end of the 1990s, the institution’s activities have been refocused on Central Africa. Some of these collections, though recently acquired, have received less attention as a result.

The information contained in this article is mostly based on resources available at the museum (archives, publications, etc.). The object's biography can therefore still be developed further. Do you have any comments, information or stories to share about this object or this type of object? Please contact us at: provenance@africamuseum.be.