Living in the shadow of an active volcano

Adalbert Muhindo, a researcher at the Observatoire volcanologique de Goma, successfully defended his doctoral thesis at the Royal Museum for Central Africa and the Université libre de Bruxelles. His work will help improve risk management of an eruption of the Nyiragongo volcano in Goma, eastern DR Congo.

Nyiragongo is one of the most active volcanoes in Africa. Located in eastern DR Congo, about 15 km north of Goma, it directly threatens this city of nearly one million inhabitants.

In its last two eruptions, in 1977 and 2002, its devastating lava flows killed dozens of people and caused a major humanitarian and economic crisis in this region already plagued by recurring wars.

Today, Goma’s population is twice what it was in 2002 and is now estimated at one million people, suggesting an unprecedented disaster in the region in the event of another eruption. 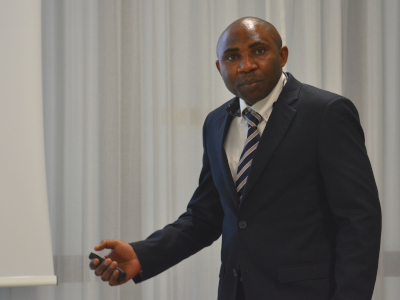 Mobility is a crucial factor in times of crisis.

‘In Goma, the online databases used to determine a route (Google Maps or others) do not provide reliable paths, sometimes indicating impassable roads’, explains Adalbert Muhindo. ‘In the course of our study, we therefore first determined the quality of the road network in Goma.’

‘Then, by distributing GPS devices to drivers and pedestrians, we studied the mobility of the population, allowing us to estimate the time it takes to travel between two points in the city.’

‘By combining road network data with population mobility data, we have developed a functional database for Goma. This is useful for both the rescue services and the population that needs to take shelter.’

To prepare for a possible eruption, the authorities of the city of Goma have contingency and evacuation plans, which indicate how to respond in the event of a volcanic eruption.

On the one hand, these plans do not take daily shifts in population into account. ‘The population varies depending on the day of the week and the time of day’, Muhindo said. ‘Many people come to Goma to work, but do not live there.’

‘If an eruption occurs, we can now accurately estimate the areas to be evacuated and the number of people in those areas.’

‘We therefore first determined the change in the total population. Then we studied the spatial and temporal variation of this population within the city, as people move around to reach sites of activity.’

On the other hand, contingency and evacuation plans determine the number of people to be evacuated in each area of the city. ‘But this estimate is based on where people live, without accounting for the fact that people move during the day. With our study, we can estimate how many people are in a particular place, on a particular day and at a particular time.’

‘In addition, the lava flow susceptibility map developed by the GeoRisCA project identifies the areas most at risk of being affected by the next Nyiragongo lava flow. If an eruption occurs, we can therefore accurately estimate the areas to be evacuated and the number of people in those areas, making the contingency plan much more effective.’

‘So contrary to what the current contingency plan states, there is no need to evacuate the entire population, which was always going to be difficult to achieve.’

A thesis that fits into a broader framework

Muhindo's doctoral thesis is part of a series of projects conducted by the GeoRiskA team at the Royal Museum for Central Africa.

In collaboration with numerous Congolese, Rwandan, Burundian and Ugandan institutions and universities, the unit’s researchers are developing tools for better risk and disaster management and sustainable land-use planning.